Ed Sheeran stays in the No. 1 position while Enrique Iglesias & Pitbull and Lollapalooza make new appearances 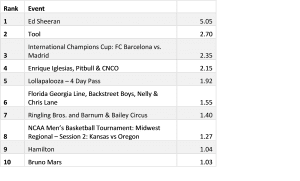 Making an appearance for the first time in this week in the rankings and landing in the No. 4 position is Latin sensation Enrique Iglesias who is co-headlining a tour with hip-hop sensation Pitbull. The Grammy –Award winning superstars and longtime friends will bring along CNCO to open for their tour.

Also new in the rankings this week is the Lollapalooza, the annual music festival featuring popular alternative rock, heavy metal, punk rock, hip hop and EDM bands. The event managed to secure the No. 5 position. The event hosts more than 160,000 people over a multi-day span and has been held at Grant Park in Chicago since 2005. The event this year will be held over a 4-day period, August 3-6. Some acts set to perform at the event include: Muse, Lorde & Cage The Elephant, The Killers, Blink 182, Run The Jewels, Chance the Rapper, The XX & Alt-J, Arcade Fire, Big Sean & The Shins.

Moving down into the No. 3 position this week is The International Champions Cup, which will be played by FC Barcelona and Real Madrid on July 29th at the Hard Rock Stadium in Miami. The futball matchup, called the El Clasico, is expected to draw millions of viewers and will feature two of the games’ most revered players, Cristiano Ronaldo and Lionel Messi.

Staying the No. 1 spot again this week is singer-songwriter, Ed Sheeran who is set to tour in support of his third studio album, Divide.

Also new in the rankings this week is the Gorge Amphitheatre which landed in the No. 7 position. The venue is located in Columbia River in George Washington and has been voted as ‘Best Outdoor Concert Venues in America’ by ConcertBoom. The venue likely made into the rakings with some help from excited Tool fans who are set to see them perform there on June 17.

Another venue in the rankings this weeks is the Tennis Center at Crandon Park, which landed in the No. 8 position. The 13,800 set venue is located In Miami and is currently hosting the Miami Open Women’s and Men’s tennis competition.

TicketNews Exclusive Rankings and Power Scores are based on ticket sales from the TicketNetwork Exchange™. Two factors are used to calculate a power score: total ticket sales from the given event and total ticket sales within the category. Since the sum of all events’ power scores equals 100 in any given category, an individual event’s Power Score represents its category-specific significance. Top Event Power Scores should only be used to compare events within a particular category, and not across categories