Amid the networking and learning at the World Ticket Conference at Aria in Las Vegas, the National Association of Ticket Brokers took time to honor individuals within its membership with its annual awards.

Given during the lunch program on Friday afternoon, the awards covered a range of topics and were emceed by Las Vegas Tickets owner Ken Solky, NATB Vice President and West Coast Director.

“It’s important to have these awards,” says NATB President Tom Patania, owner of Select-A-Ticket, Inc in New Jersey. “Recognition is always a big thing, and it’s a reminder that we’re not an organization of paid people – we’re member driven. People give time away from their business and personal lives to make everything better in our industry, and you can’t put a price on that.”

Gary Adler received the President’s Award, presented by Patania at the close of the ceremony, for his service to the organization as Executive Director and General Counsel. He has been involved with the NATB since its inception in 1994.

Last, but not least, the NATB honored several individuals with longevity awards – given for those with 25 years or more of service in the industry. Individuals received a certificate “In Grateful Appreciation of Your 25 Years of Outstanding Service and Dedication To Your Profession”. They were:

Main photo: Angie Coss addresses the room after being honored with the Angelo Peduto Award. 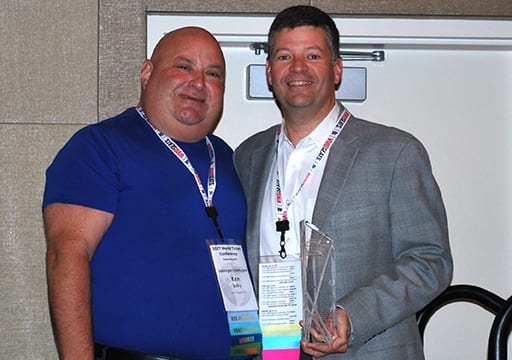 Ken Solky (left) and Corey Gibbs during the ceremony.