While battles are waged every year in state houses across the United States, certain locations are key to the industry. New York, home to Broadway and famed venues like Madison Square Garden, Jones Beach Amphitheater, and Syracuse’s Carrier Dome, is one such place. 2018 is shaping to be a tough fight, as officials are meeting with representatives from both sides of the ticket battle starting this month.

Thankfully, for those who would seek to keep the resale rights of individuals and companies operating in New York and for events in that state, the Coalition for Ticket Fairness (CTFNY) will be in the room.

Holding court at one of the closing sessions of Ticket Summit, representatives of CTFNY addressed the ongoing battle in the Empire State, and its importance to the entire industry on Thursday afternoon in Las Vegas.

“My first trip [to the legislature] was last May, and if you looked at the [proposed] bill, it was a bad one… it looked like it was written by Ticketmaster,” said Sam Umlas, COO of Day of Game Tickets in New York. “But we realized how little the senators knew, and how much we could give them, information-wise, to help form the laws correctly in New York.”

Since 2007, New York has been a largely open market state, with limited regulation on the resale of tickets. Forces have been pushing hard to close the market off ever since, as primary sellers and venues try to use their influence to preserve their monopoly on the market and extend into the secondary space, and politicians are pushed by constituent complaints over rapid sellouts – which primary sellers are quick to blame on “scalping” to avoid a hard look at how holdbacks and other presales keep tickets out of circulation from the start.

Last November, Governor Andrew Cuomo signed legislation making resale of tickets obtained using automatic purchasing “bots” a criminal offense in the state. Attorney General Eric Schneiderman has pushed for further reform, including increased transparency, but the existing law was kept for another year with a straight extension coming out of this year’s session.

Another NY politician, state Sen. Daniel Squadron, has made a name for himself as a supporter of anti-competitive reforms like those pushed by “Hamilton” creator Lin Manuel Miranda – going so far as to use speaking time on the senate floor to rap modified Hamilton lyrics riffing on the need for reform. Upon meeting the politician, however, coalition members realized that he, too, was more misinformed than zealot against the industry. 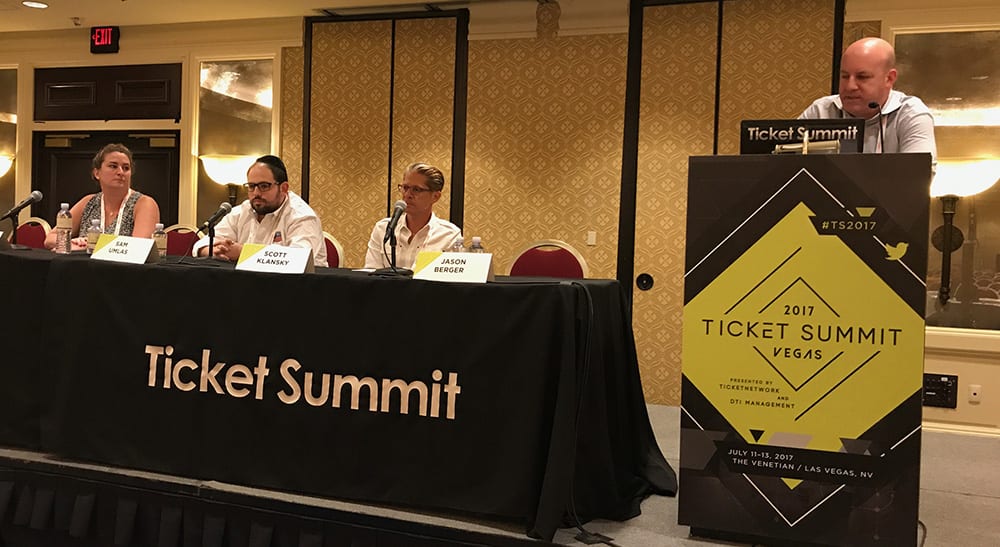 Jason Berger (at podium) and other members of the Coalition at Ticket Summit.

“I got to speak with [the Senator] for two hours, and I personally saw nothing that makes me to believe that he doesn’t have good intentions,” says Jason Berger, who owns Allshows.com and leads CTFNY. “He’s trying to get it rights for the fans, he’s just confused as to the right path. He’s looking for guidance and is open to new thoughts and discussion.”

That is exactly where the coalition hopes to make its mark in the future – bringing a new perspective into the conversation, and augment representatives of companies like TicketNetwork who are already there in Albany hoping to steer the conversation away from the direction that major industry players like Ticketmaster and event promoters want it to go.

According to Berger, who spoke with TicketNews at length after his panel discussion was over, there are to be three or four roundtable discussions in New York before the session starts. Each will feature members of Cuomo’s administration, the legislature, and select representatives from all sides of the event industry, from primary and secondary ticket sellers to venues and promoters.

“We’re going to have representation at each one,” he said. “But what’s almost more important is what goes on behind the scenes. We want to make sure that our voice is heard on all of the issues, and at the same time, we can learn about what the other sides are going to be pushing for, and make sure we make clear how that will affect us in our industry.”

The coalition is a purely volunteer effort, with most of its members hailing from the New York area – which makes sense, given that any legal changes to how New York regulates its ticketing marketplace will have a huge impact on their business. They were quick to add, however, that as New York goes, other states will likely follow. And that could have a major impact on brokers and other secondary-related companies throughout the country.

“We’d love to have more people be involved and understand the importance of this kind of work and how it relates to their livelihood,” Berger said. “If you want to be passive and just let change happen around you, it’s hard to say you have a right to complain when your livelihood is gone if that’s where this goes.”