Bon Jovi63 Concert cancellation165 This House is Not For Sale Tour2 tour announcement854
Bon Jovi fans in Montreal will have to wait another month to see the band; after coming down with the flu, the rockers had...

Bon Jovi fans in Montreal will have to wait another month to see the band; after coming down with the flu, the rockers had to postpone their two upcoming Canada shows.

The band, as well as their concert promoter Evenko, took to Twitter this morning, explaining that the shows for tonight and tomorrow will be honored on May 17 and 18. Although fans were upset, they’re happy that the band didn’t completely cancel the show, but rather, put a new date on it. 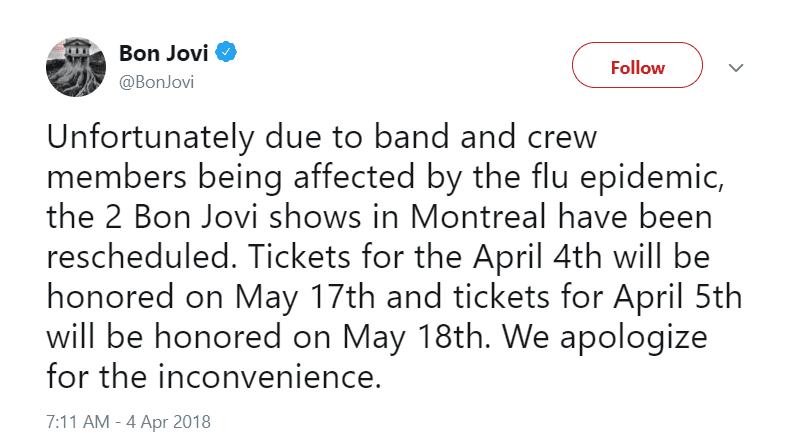 This isn’t the first time an artist has backed out of a show due to the flu epidemic over the past few weeks — Pink also postponed shows in Montreal and Detroit due to the nasty virus. Additionally, Liam Gallagher of Oasis had to stop singing mid-show at Lollapalooza in Chile because he physically couldn’t sing anymore after a chest infection.

Bon Jovi’s This House Is Not For Sale Tour has been extended through May and makes stops in major cities like Chicago, Raleigh, and Houston. If all goes well, the band will perform this weekend at Newark, New Jersey’s Prudential Center. Additionally, the group will be formally inducted into the Rock and Roll Hall of Fame on April 14 in Cleveland. This ceremony will reunite the band with guitarist Richie Sambora, who departed from Bon Jovi in 2013.

Check out the upcoming tour dates below and find tickets to a show via Ticket Club.

Bon Jovi This House is Not For Sale Tour 2018