The ’80s stars of Huey Lewis and The News were forced to cancel all upcoming shows as the frontman deals with serious medical issues.

Just at the end of March, the band cancelled their St. Augustine show in Florida for this April 22. Lewis cited in a statement that he was “going through some medical problems at the moment that forbid me from performing,” but said he’s “confident” he’d be back on the road soon.

This morning, Lewis took to Twitter, announcing the cancellation of all of their upcoming shows, due to hearing loss.

“Although I can still hear a little, one on one, and on the phone, I can’t hear music well enough to sing,” Lewis said. 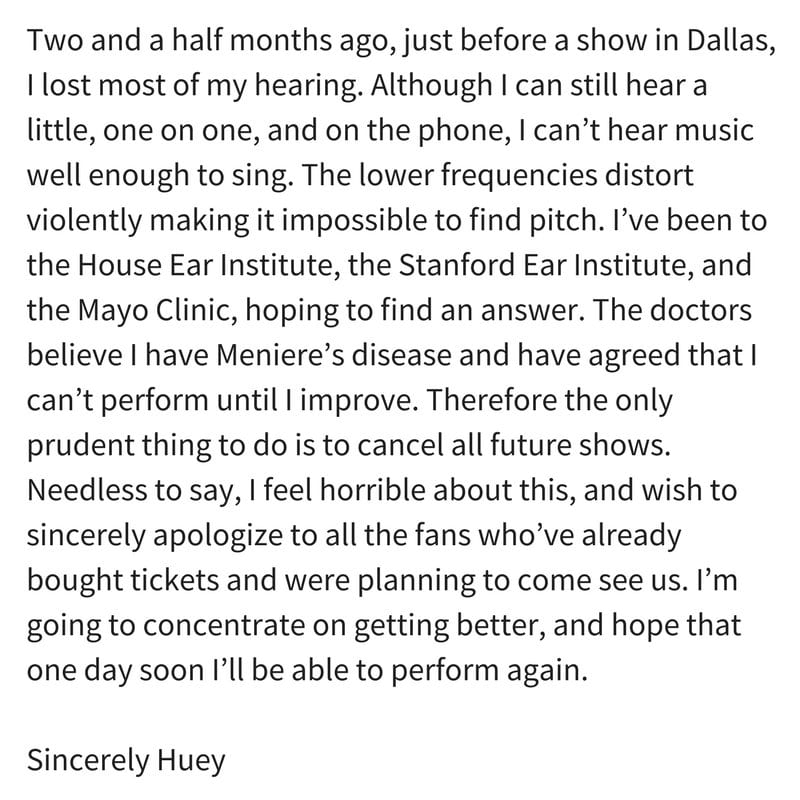 Lewis cites potential Meniere’s disease, and is indefinitely done touring until he can hear better. The disease, per the Mayo Clinic, is an inner ear disorder which causes vertigo and fluctuating hearing loss. Other musicians like Ryan Adams and Broadway actress Kristin Chenoweth have also dealt with Meniere’s in the past, but recovered and continued their careers in music.

All of the upcoming show dates and music festivals, including the Wisconsin State Fair and San Francisco’s Outside Lands Festival are officially cancelled. Wisconsin State Fair guests will receive an email regarding refunds if the ticket was paid through a credit card, and those who paid via cash or check will need to bring the original ticket to the State Fair ticket office to receive their money back.

Although fans are upset that they’re going to miss the group perform live, EW said that a stage musical featuring the band’s music is currently in the works.