Beyonce21 Jay-Z88 On The Run Tour II3 OTR II Tour1 ticket sales69
The headaches are mounting for the co-headlining OTR II Tour featuring Beyonce and Jay-Z, as it appears that the On The Run II Tour...

The headaches are mounting for the co-headlining OTR II Tour featuring Beyonce and Jay-Z, as it appears that the On The Run II Tour is seeing some serious sales woes. With the tour set to launch its UK leg in Cardiff, tickets are being given away through back channels to make sure the house isn’t half-full when the lights go up, according to a number of sources.

OTR II has seen more than its fair share of hiccups since day one, with a pre-announcement leak of tour dates (potentially on purpose?) and then a presale marred by system issues on Ticketmaster, which angered the “Beyhive” by booting some top-tier tickets out of people’s carts. Among the complaints on that initial sale date were the fact that tickets seemed to be gone quickly – which is a factor in how the event producers attempted to allocate tickets among the various presales before they went on sale to the general public.

And what we’re seeing now seems to indicate that they got the fuel/air mixture of tour pricing and release badly wrong.

Fans holding tickets to tonight’s show in Cardiff posted excitedly about being upgraded in one forum, after having received word that a production change meant their seats wouldn’t have ideal visibility, so they were relocated. They were moved from a back section upper level seat down to the middle level of the arena. Curiously, their seats were in the middle of the upper bowl – which makes it seem difficult to believe that any obstruction could actually be in play.

@ticketmaster emailing me to tell me our seats have been moved closer to @Beyonce next Wednesday has honestly made my week??

As of Wednesday afternoon in the United States, it was still possible to grab the maximum number of tickets for the show from Ticketmaster UK – eight seats. In fact, looking at the first five stops of the tour, all but one still has the availability to purchase eight seats together from the primary market. 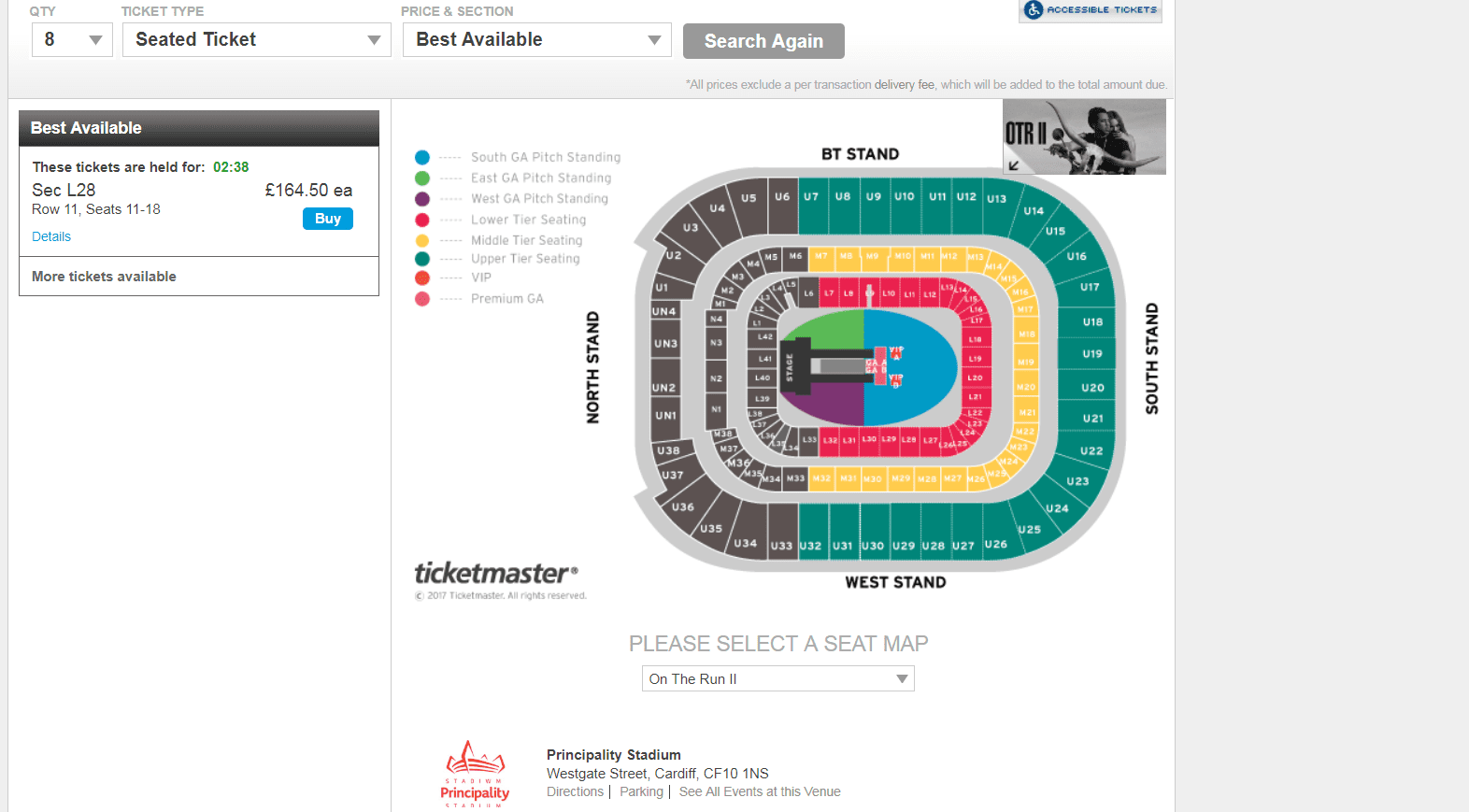 On this side of the pond, things aren’t looking any better for the power couple.

As the tour launched, one of the myriad of presale options was for members of Jay-Z’s Tidal music service. Now, the script has flipped, and many tour dates are offering those who purchase tickets free memberships to Tidal for six months.

One of the stops on the tour – at Vanderbilt Stadium in Tennessee – will see at least 1,600 fans through the turnstiles at no cost, as the university has managed to score tickets for its entire incoming Class of 2022. “We are fortunate that we were able to partner with the athletics department, using funds we had set aside for the class party, to secure a block of tickets for the concert. Doing this mitigates any financial barriers to participation, which is in line with Vanderbilt’s commitment to providing an inclusive campus environment,” a press release issued by the university said.

And now, news has come out that the tour is offering free tickets to individuals in Europe who perform charitable acts. “Wherever you are and whatever skills, talents and resources you possess, are of value to you and others in your community, country and across the globe,” an official with Parkwood Entertainment told Good Morning America.

The strategy seems to be borne out of the duo’s management attempting to price the secondary market out of the equation, only to find that a pricing model for the final remaining tickets of a sold out show is a bad fit for every seat in the house of a stadium tour. Similar to Taylor Swift’s Reputation Tour, that strategy has led to a mad scramble as events approached to make sure the house was full, including price drops and giveaways.

Jay-Z faced similar negative press with last year’s 4:44 tour, with extremely high pricing leading to poor sales and near-event giveaways. In one instance, the rapper’s management even threatened a media outlet for reporting on the issues. With just over a month before the OTR II Tour heads back across the Atlantic for its U.S. dates, we may be seeing similar coverage as the event draws near.