Live Nation738 Vans Warped Tour28 Warped Tour 20182
I stroll up to the amphitheater doors and show my photo pass as my friends trail behind, but before we can take a step...

I stroll up to the amphitheater doors and show my photo pass as my friends trail behind, but before we can take a step inside the venue, we’re blocked by security guards. “You can’t go through this way,” the guards spat at us, and we look around in confusion. I point to empty seats in front of us and ask why we can’t sit in the vacant spots but don’t receive an answer. Instead, we are forced to climb down from the lawn and squeeze our way through the over-packed crowd.

This was my experience at the last-ever Vans Warped Tour stop yesterday at the XFINITY Theatre in Hartford, Connecticut.

The Vans Warped Tour is currently on it’s final cross-country run, pulling in thousands of fans at each stop. However, when the tour hit Hartford yesterday, the show ended on a sour note after fans were shunned from entering the amphitheater due to excessive crowds. According to the tour’s Twitter account, the main headlining bands of the day were switched from their usual location outside to inside the amphitheater because of the potential of rain. This led to chaos. 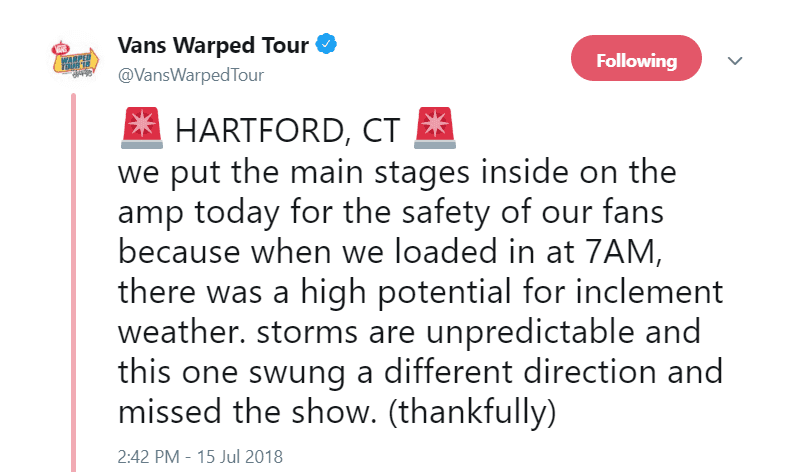 I think that the guards were not quite prepared to experience the amount of people entering the amphitheater. The fans came in packs, and each time a new group tried to enter, they were redirected to the lawn. Yet, those that were on the lawn were unable to come down and take a seat, since the aisles were filled with people. Packed like sardines, fans stood side-by-side and watched their favorite bands from the back of the venue.

Each time a band finished a set, the guards would let a large group of concertgoers exit the amphitheater, and more trailed in. While this seemed to work, fans were not happy with the outcome. There was no real plan set in place; I asked when I could enter the amphitheater and was told by a guard that they were waiting for a “green light.” Even though I had a photo pass, the guards still wouldn’t let me in until I found another employee and explained that I needed to be in front of the stage to take pictures.

Here’s a photo I snapped before entering the Amphitheater, which shows fans sprawled out on the ground, since they were unable to find a seat inside. 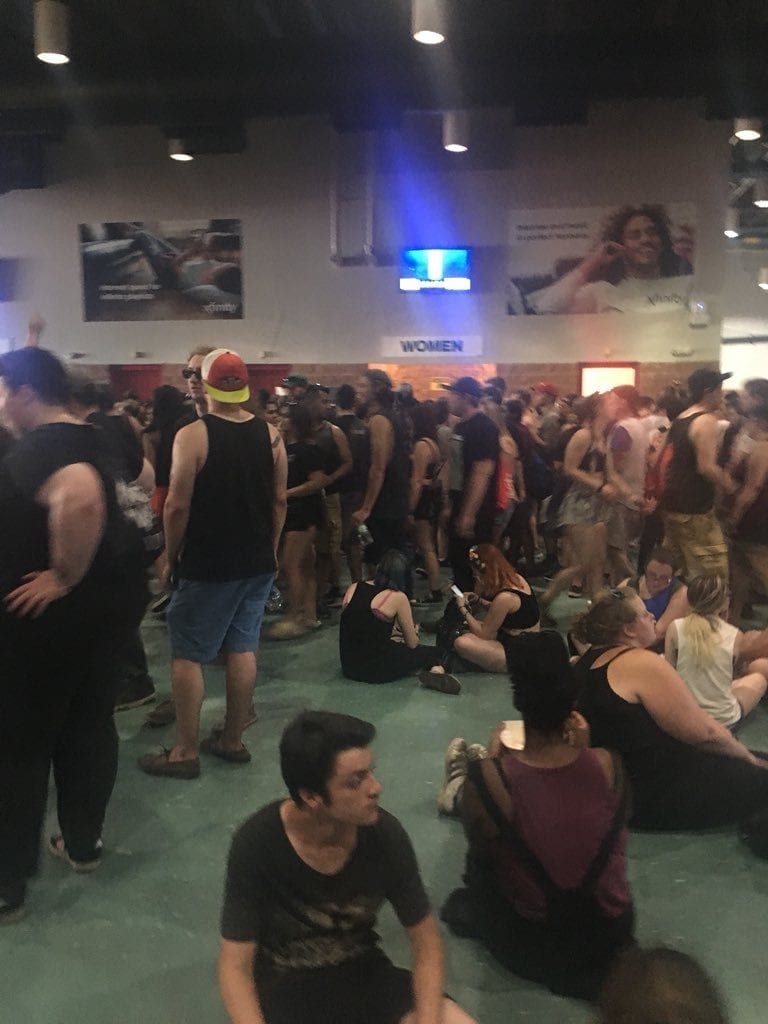 Concertgoers and photographers/press took to Twitter, explaining their situation. One fan said that photographers were being shoved under the stage by security guards, and others expressed their anger since they saw seats available, but were not allowed to sit in them. It also seemed like the guards were picking and choosing who they let through, while others were told to go to the lawn.

I personally can’t handle the mosh pits and crowds that ensue at shows like Warped Tour, but the good part about a show like Warped is that I don’t have to. There’s enough room to always see the band, even if you’re in the back of the crowd. However, because of the chaos that went down inside of the amphitheater, this wasn’t possible. Fans had to either fight for a spot by pushing through the crowd, or listen all the way from the lawn.

According to the Vans Warped Tour Facebook, they don’t have the ability to override the Live Nation/venue staff, leaving the blame on both Live Nation and the XFINITY Theatre employees.

Since this is the last year of the tour, there will likely be nothing done about what happened yesterday.

Alike many of the concertgoers yesterday, I can say that Warped Tour ended on a sour note. The unorganized, chaotic mess left me feeling more stressed than excited to see my favorite bands, and the venue’s security guards did not seem to care about any of it.

For fans looking to redeem their Warped Tour experience, there are more dates available, including shows in Massachusetts, New York, and Pennsylvania. As for the rest of us, I guess we’ll just have to be happy with the fact that this is the last time we have to deal with the tour at XFINITY.

Check out my review and photos (from the good part of the day) here.