In honor of his latest record Boarding House Reach, Jack White is crossing the globe, and he has revealed that the tour will extend through Canada later this year.

White will continue touring in the U.S. through late September, making stops at Las Vegas’ iHeartRadio Festival and Tennessee’s Pilgrimage Music & Cultural Festival. Then, he is headed to Europe, starting off in Moscow, Russia and heading to cities like Berlin, Warsaw, and Liverpool.

On November 2, he will begin the Canadian trek, kicking things off in Edmonton. He’ll make stops in Calgary, Winnipeg, Ottawa, and Quebec City, among others, before wrapping-up in Halifax, Nova Scotia on November 14. Opening acts for the Canada dates have not been revealed yet.

The Boarding House Reach Tour has sparked a lot of conversation, since all of the shows have a strict no-phone policy. White is the first artist to have an entire phone-free tour by using the system Yondr, which locks concertgoers’ phones in a pouch during the show. He implemented this policy in hopes to have fans actually look up from their mobile devices and “experience music and our shared love of it IN PERSON.”

Ticketmaster has encouraged fans to print our paper tickets before the show to ensure “a smooth entry process.” On their ticketing site, a message notes the policy: 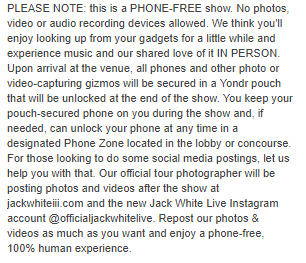 So far on tour, the no-phone policy has been received well by fans, meaning White could be on the brink of changing the concert world as we know it.

Boarding House Reach is White’s third solo album, which was released this past March. It features hit singles “Over and Over and Over” and “Connected By Love.” The LP follows 2014’s Lazaretto, and his 2012 debut Blunderbuss.

Check out White’s upcoming tour dates below, including his new Canadian tour.

Visit Ticket Club to find tickets to see White on tour this year.