Following their summer co-headlining tour with Godsmack, the rockers of Shinedown have just revealed a new run of shows across the U.S. next year with Papa Roach and Asking Alexandria.

Currently, the group is on tour with Godsmack through late October before heading to Europe for a string of shows with Starset and Press to Meco. The “Attention Attention World Tour” is due to kick-off on February 20, 2019 in Estero, Florida and will make stops in cities like Baltimore, Green Bay, Uncasville, Cedar Rapids, St. Louis, and Wichita. Loveland, Colorado will close-out the U.S. leg of the trek on March 20.

Earlier this year, Shinedown released their sixth studio album, Attention Attention, which debuted at No. 1 on the Billboard Alternative, Top Rock and Hard Rock Albums charts, as well as No. 5 on the Billboard 200. The LP features the hit single “Devil,” taking the No. 1 spot on the Billboard Mainstream Rock Songs Chart. Their latest single, “Get Up,” was written after frontman Brent Smith saw his friend and bassist Eric Bass struggle with clinical depression.

Supporting act Papa Roach released the record Crooked Teeth last year, which includes singles “Born For Greatness” and “Help.” According to Loudwire, the band has reportedly been working on a new album to add to their 8-record catalog. Additionally, opener Asking Alexandria will be touring in support of their 2017 self-titled LP. 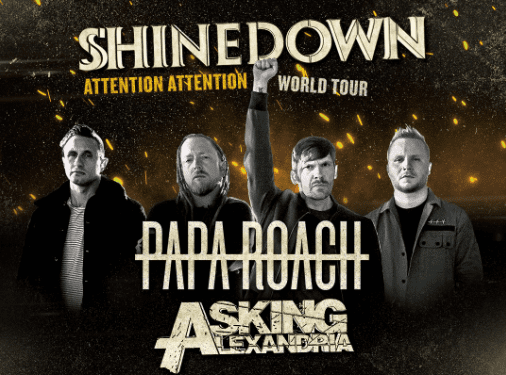