Fans Can Now Buy Tickets On YouTube Through Eventbrite Integration

eventbrite50 Industry376 Ticketing273 YouTube8
YouTube and Eventbrite teamed up to allow fans the ability to see nearby concerts and buy tickets directly from a music video page. While...

YouTube and Eventbrite teamed up to allow fans the ability to see nearby concerts and buy tickets directly from a music video page.

While watching a music video on YouTube Official Artist Channels, fans will see a section below the video listing live performances, and with just a click, they will be led to an Eventbrite page to buy tickets. YouTube noted in a blog post that this feature is available on both desktop and mobile as of Thursday. The user will also be able to see the artist’s upcoming shows and festivals nearby.

This new ticketing option applies to “thousands of artists,” a YouTube spokesperson said, and noted that they will “continue to add new artists and venues of all sizes to our list in North America as well as expand globally.” Although YouTube declined to comment on the terms of the deal or proceeds they will receive from Eventbrite’s sales, YouTube stated that more than 1 billion people per month visit the site to listen to music.

“This partnership is a homerun for artists, fans and independent venues and promoters,” Andrew Dreskin, president of Eventbrite’s music division, said in a statement. “We’re fired up to leverage the power of video discovery to help our clients drive ticket sales, support artists that play their venues, and give fans the kinds of live music experiences they’ll never forget.”

Eventbrite has more than 50 distribution partners aside from YouTube, including Spotify, Instagram, Facebook, and Bandsintown. YouTube, who made a deal with Ticketmaster last November, now covers more than 70 percent of the ticketing market in the country.

Here is an example of the integration via a Panic! At The Disco music video on desktop: 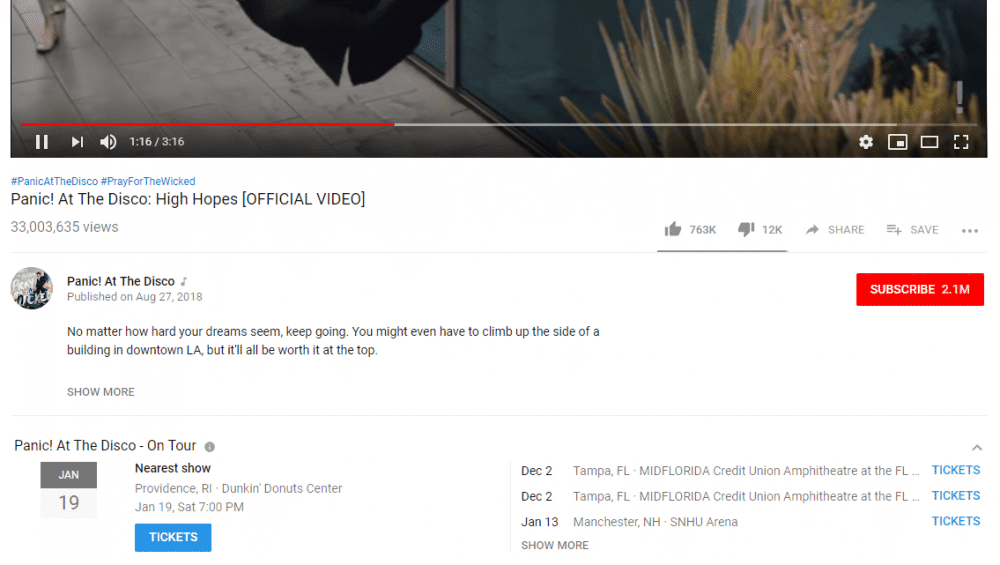