Kidz Bop Kids To Head Out On World Tour in 2019

This past year, the Kidz Bop Kids traveled across North America for their most successful tour to date, playing to hundreds of thousands of kids and families. Their 2019 trek will kick-off in Australia during a special televised performance in January, followed by a show in the UK with the British Kidz Bop Kids.

Then, next May, the group will head to the states for a show in San Diego, California on May 31. They’ll hit cities along the way like Los Angeles, New York City, Denver, Raleigh, Milkwaukee, and Kansas City before wrapping-up in Mountain View, California on September 8.

Throughout the trek, the Kidz Bop Kids will perform some of the modern top-hit songs “sung by kids for kids.” The tour also includes a new set design and choreography.

“Over the past five years, we have established KIDZ BOP tours as an annual must-see live concert event for families, playing to sold out crowds in some of America’s most iconic venues from coast to coast,” Victor Zaraya, president of Kidz Bop, said in a press release. “This year, we are excited to expand internationally to create first concert experiences and life-long memories for kids worldwide.”

Additional dates will be announced in early 2019. Check out the full list of tour dates below. 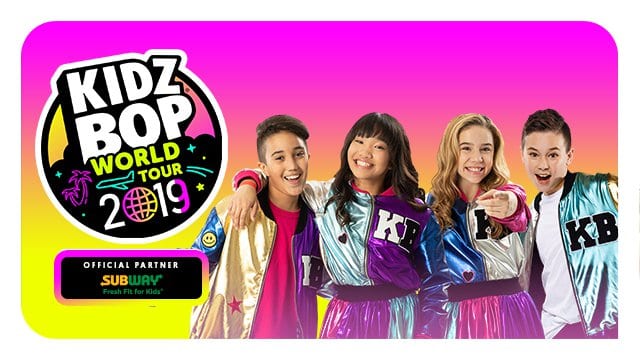