Halsey and The Killers are among the star-studded list of artists set to headline Woodstock 50, the highly-anticipated event this August celebrating the 50-year anniversary of the 1969 festival.

As previously announced, The Black Keys and Dead & Company will also headline the event, along with Santana, Chance The Rapper, Jay-Z, and Imagine Dragons. Other legacy acts set to take the stage include Robert Plant and The Sensational Space Shifters, David Crosby and Friends, John Fogerty, Canned Heat, Country Joe McDonald, John Sebastian, and Melanie.

On Friday, The Killers will take over the show, followed by popstar Miley Cyrus, indie-rock bands The Lumineers and Nathaniel Rateliff and The Night Sweats, and Jack White’s revived The Raconteurs. Rising acts Princess Nokia, Maggie Rogers, and Bishop Briggs will also perform.

Halsey, who has quickly risen to fame over the past few years with her edgy personality and relatable hits, will close-out the show on Sunday. She will be joined by rock sensation Imagine Dragons, along with a slew of indie-rock artists like Cage the Elephant, Young the Giant, Brandi Carlile, and Courtney Barnett. Soul-funk singer Janelle Monae, hip-hop artists Vince Staples and Earl Sweatshirt, and punk rock’s Pussy Riot will also make appearances.

“We’ve lined up artists who won’t just entertain but will remind the world that music has the power to bring people together, to heal, to move us to action and to tell the stories of a generation,” Michael Lang, co-founder and producer of the 1969 and 2019 Woodstock festivals said in a release. “Our hope is that today, just as in 1969, music will be the constant that can inspire positive change.”

The festival is set to run from Friday, August 16 through Sunday, August 18 in Upstate New York at Watkins Glen International. While another event is being held during the same weekend at the original site in Bethel, Lang explained that Bethel Woods just doesn’t have the capacity to hold this many people. He expects the attendance to be in the six-figures.

Woodstock has always been about spreading love and peace, uniting people to share a musical experience while supporting equality and inclusion, as well as a sustainable future. In addition to music, the festival is partnering with numerous nonprofit organizations that it believes impacts all generations. These include popular organizations like March For Our Lives, which was created to end gun violence, as well as HeadCount, which works with musicians to stage voter registration drives at concerts. Others include Happy Hippie Foundation, Dolphin Project, and Conservation International.

Lang hopes that this festival can make up for the previous Woodstock celebration in 1999, which ended in drug overdoses, sexual assault, riots, and fires. He believes that Woodstock 50 has the potential to create social change and activism, instilling “energy back into young people to make their voices heard, their votes heard.”

Tickets to the festival will go on sale on Earth Day, April 22. For more information about the fest, visit Woodstock 50’s website. Check out the full lineup below.

Visit Ticket Club to find tickets to the 3-day event 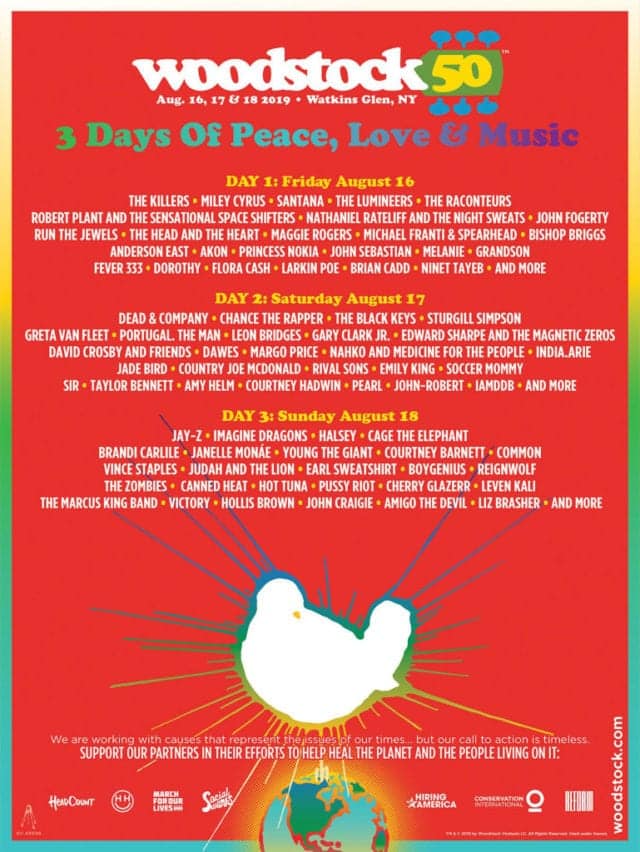