concerts577 Megadeth15 Music414 Tour News17
Megadeth have cancelled the majority of their 2019 concerts following the news that frontman Dave Mustaine is undergoing treatment for throat cancer. The announcement...

Megadeth have cancelled the majority of their 2019 concerts following the news that frontman Dave Mustaine is undergoing treatment for throat cancer.

The announcement of Mustaine’s diagnosis led the heavy metal group to cancel most of their shows scheduled through the remainder of the year. They were set to embark on a tour across North and South America, among other gigs.

“I’m working closely with my doctors, and we’ve mapped out a treatment plan which they feel has a 90% success rate,” Mustaine shared with fans on Instagram. “Unfortunately, this requires that we cancel most shows this year.” 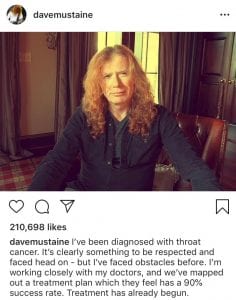 The famous frontman, 57, added that the band’s five-day inaugural fan cruise will still take place as scheduled this October. While Megadeth may not be fully involved as planned, they will appear onboard the ship in some capacity alongside Testament, Anthrax and other heavy metal forces.

Megadeth’s last major tour came in 2017, though Mustaine has spent the last few months on the road without his band mates. The singer was part of the extensive Experience Hendrix Tour lineup and shared the stage with an array of fellow rock legends to pay tribute to Jimi Hendrix.

While Megadeth may not be heading out on the road in the near future, Mustaine confirmed that they are currently in the studio working on new music. Their last studio effort was 2016’s Dystopia, which finally earned Megadeth their first Grammy after 11 nominations, taking home the Best Metal Performance win for the record’s title track.

Mustaine is looking forward to the future in spite of his diagnosis with the new album coming together and promising fans that the band will “be back on the road ASAP.”

“I’m so thankful for my whole team – family, doctors, band members, trainers, and more. I’ll keep everyone posted,” he shared.

A giant of the thrash metal genre, Mustaine founded Megadeth with bassist David Ellefson in 1983, shortly after Mustaine’s dismissal from Metallica. They have put out 15 albums in the decades since and sold more than 38 million records worldwide.