Black Keys No Transfer Disclosure for Wiltern Impossible to Locate

Live Nation790 the black keys19 The Wiltern3 Ticketmaster847
A week ago, hundreds of fans were left in the lurch when they arrived at a Los Angeles performance by The Black Keys. With...

A week ago, hundreds of fans were left in the lurch when they arrived at a Los Angeles performance by The Black Keys. With what most say was zero warning, the band had made tickets to the performance at The Wiltern non-transferrable, meaning any fan who purchased tickets to the sold-out show on the secondary market was denied entry, by order of the band they had paid hundreds of dollars to see.

After the news showed up to cover the debacle, the band and promoter Live Nation were quick to throw the blame onto anyone who dared list a ticket for resale.

“[Thursday night’s] concert tickets were $25 and geared toward the fan club,” the band told Digital Music News in an emailed statement. “This was our first show in over four years and the kickoff of the Let’s Rock Tour. Because we were playing a venue far smaller than the rest of the venues on the tour as a warmup show, we turned off ticket transferability to ensure that our fans got in the door at the low ticket prices we set for them.”

“Unfortunately, scalpers took this opportunity to defraud our fans and steal their money by selling tickets that were ineligible for transfer on scalper sites.”

Ticketmaster was right there blaming the secondary ticket market for the terrible experience tied to its new “safetix” dynamic barcode system.

“The presenters of the concert directed that these tickets be made available only to fans and that they be strictly nontransferable,” Ticketmaster said in a statement. “This was messaged from the beginning with the announcement of the performance and throughout the sales process. Unfortunately, bad actors took advantage of this situation and posted screen shots of tickets that were not valid for entry onto the secondary market. We always recommend purchasing tickets from the official source.”

In the aftermath, TicketNews has tried hard to verify the claim that Ticketmaster put forth in its statement. We searched the event page on Live Nation’s website, the Black Keys’ fan club website, and received copies of actual order confirmations from readers who purchased tickets to the show.

None of them said anything about the show having any restrictions against the tickets being transferred, which flies directly in the face of the statement Ticketmaster issued.

We reached out directly to Live Nation, indicating that we had been unsuccessful in locating any aspect of the ticket sale process where the non-transferability was disclosed to buyers, and requesting that they point us in the direction of any one of the announcements of the performance or points in the sales process where that fact was disclosed.

They did not respond to our request for comment. We received similar silence from The Wiltern and management for The Black Keys.

Here is what we found, and what it said, about the ticket sales for the show in question: 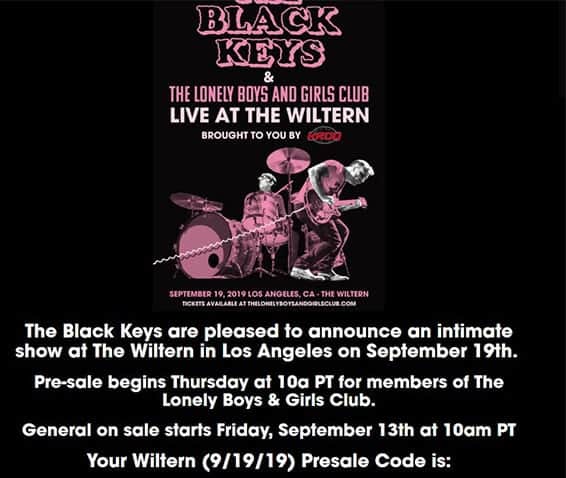 The Lonely Boys and Girls Fan Club had a presale for the performance – the band itself referenced the tickets for fans as being $25, and that being the reason for the denial of resold tickets. Nevermind the fact that the band was also reportedly selling “Premium” tickets for amounts greater than 20x that figure – the point is, it doesn’t say anything about tickets being non-transferrable. 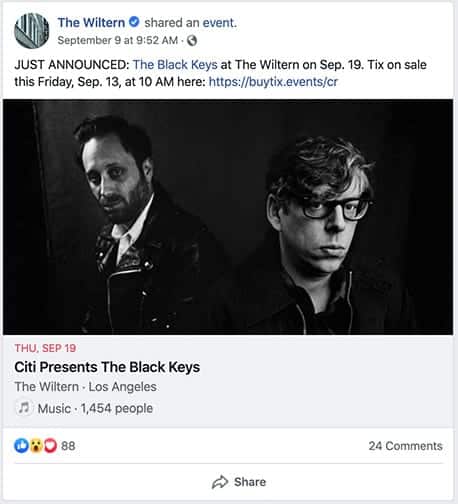 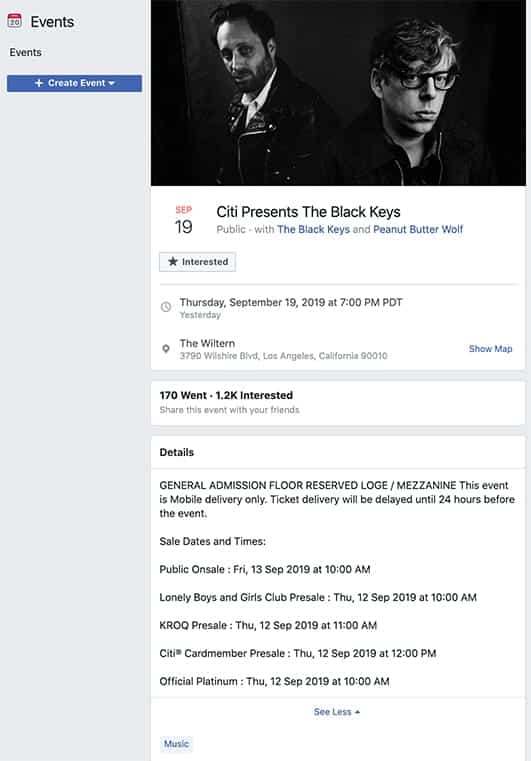 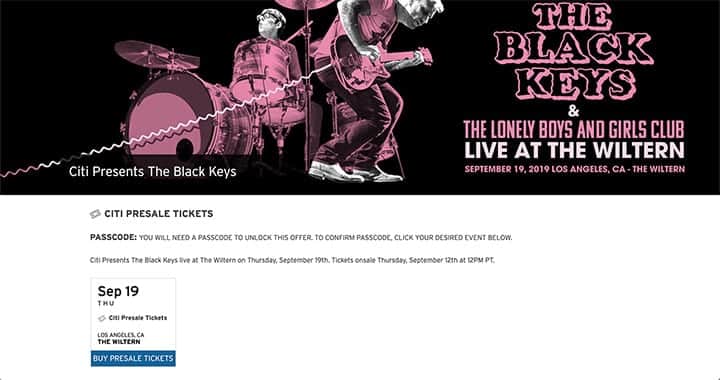 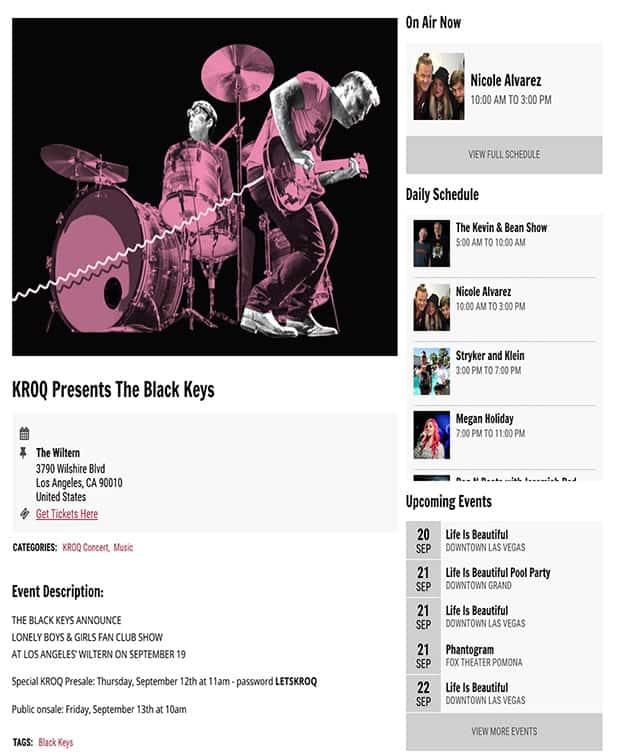 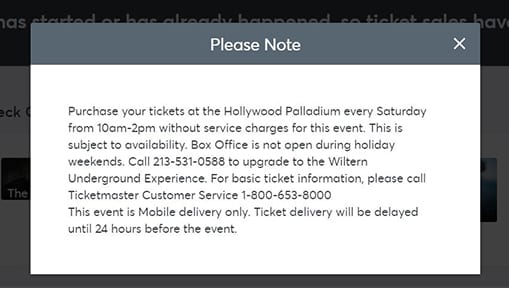 In the event notes on the actual page where customers would purchase tickets, the only note is that the event is mobile delivery only, and that ticket delivery would be delayed until 24 hours before the event.

Perhaps most damning – the order confirmation page sent to us by one reader, who wished to remain anonymous. Again, we see disclosure that tickets will be held until 24 hours prior to the event, but no additional disclosures.

What does all of this mean?

Ultimately, it is one of two things. Either Live Nation, The Black Keys, and The Wiltern disclosed that the tickets would not be transferable from the start, as they claim. And any trace of any of those disclosures are lost to the sands of time. Or, the band, its promoters, and the venue are blaming the secondary market for locking out hundreds of fans who bought valid tickets to an otherwise sold-out performance, when it was their last-minute decision to block the ability to transfer the tickets to the buyers that caused the chaos. And possibly misleading the public by saying that decision had been disclosed at the point of sale, when it was not.

It should be noted that regardless of disclosure, in four states, what Live Nation/The Black Keys/The Wiltern did is completely against the law. In New York, Connecticut, Virginia, and Utah, there are requirements on the books that tickets must be offered to consumers in a manner which is freely transferable. But California does not currently have such protections for its ticket buyers on the books, leaving them subject to capricious actions like this, which unfortunately almost always get blamed on people who listed tickets for sale somewhere rather than the persons who made the decision to lock people out.

This story will be updated with any response sent to us by Live Nation, The Black Keys, or The Wiltern.