BravoCon Fans Kicked-Out Of Events Due To Max Capacity

Bravocon1 capacity1 ticket issues7 tickets55
BravoCon took place in New York City this past weekend, honoring the celebrities behind some of the hottest TV shows on Bravo. However, a...

BravoCon took place in New York City this past weekend, honoring the celebrities behind some of the hottest TV shows on Bravo. However, a handful of fans didn’t get in on the fun after they were kicked-out of events due to max-capacity.

Events took place across New York City, with the main event stationed at The Manhattan Center, and other panels and experiences took place at the Skylight Modern and Union West. Attendees took to Twitter to share their experiences. One fan said that on Saturday night, the Manhattan Center reached maximum capacity and began to “eject” general admission ticketholders, saying that only those with VIP tickets could stay. 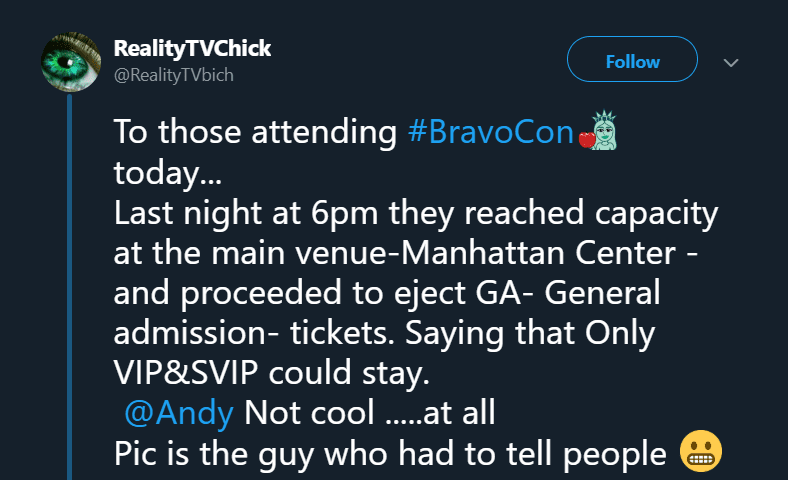 Since this was the first Bravocon, many are sharing some suggestions for a 2020 edition of the event. Fans note that next year, tickets should be more accessible, allowing the millions of fans who were shut out during the sale an opportunity to vie for tickets. Additionally, they are asking that the event to have a little more organization to avoid long lines and over capacity, along with a potential live stream for those who aren’t able to attend.