Canada26 eventbrite48 Harry Potter3 montreal2 Ticket Scam22
When an adults-only Harry Potter-themed event was coming to Montreal, Potter Heads were quick to buy $50 tickets. However, the event, which promised a...

When an adults-only Harry Potter-themed event was coming to Montreal, Potter Heads were quick to buy $50 tickets. However, the event, which promised a magical night filled with music, photo ops, and themed-cocktails, was nothing like fans expected.

Ahead of the event, LIVEMTL ran a story, noting that the one-night festival will “turn Montreal into a world of magical wonder” with specialty themed alcoholic drinks like Boozy Butterbeer, Polyjuice Potion, Unicorn Blood, and Hair of the Multi-Headed Dog, as well as themed food like Luna Love’s Pudding, Ron Family Sweater Cookies, Butterscotch Beer Popcorn, and Cauldron Cakes.

Additionally, the event promoted photo opportunities with “real life characters,” music from DJ Dobs and the Potter Party Band, Harry Potter trivia, and even “the opportunity to visit cobblestone alley to pick your wand (or let it choose you).”

The “festival” seemed promising, however, when ticketholders arrived at the Rialto Theatre over the weekend, they were met with an extremely low-budget event, which some are claiming was worse than a little kid’s birthday party. Attendees shared pictures online which shows a dry erase board that read “Magic This Way,” along with regular, non-themed cocktails. The specialty food items were not available, but instead, fans had to munch on lukewarm appetizers on wooden toothpicks. Even the “magic wands” turned out to be a flop – fans were met with wooden chopsticks that they could decorate with glitter. 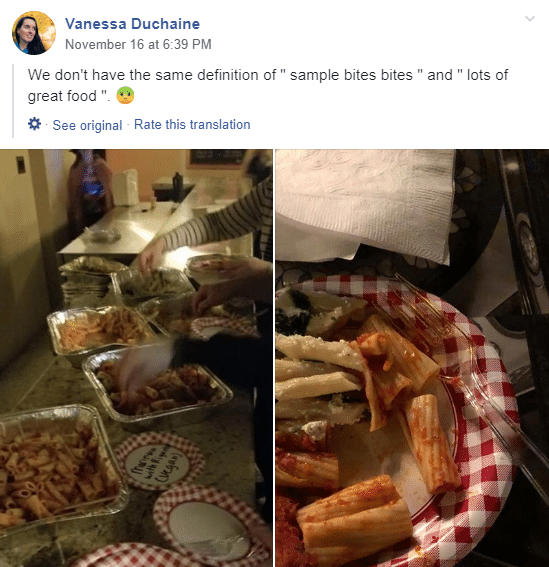 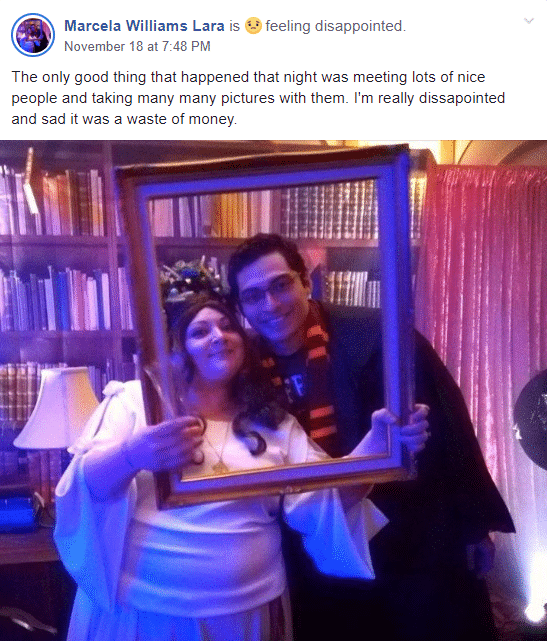 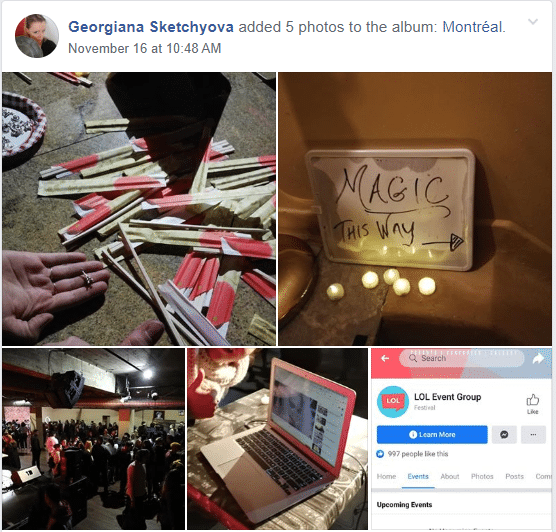 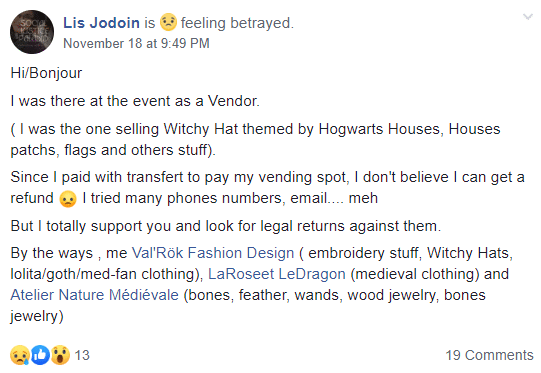 One attendee told CBC News that the event was just “shockingly bad” and “I wouldn’t even make an activity like this for children.” Another Potter Head told MTL Blog that they felt “scammed” and “the event was more misleading and the promotion of it was all lies.”

Another attendee even made a YouTube video about their experience at the “party,” starting out with waiting in 14 degrees weather with a line that lasted an hour and a half. She said there was no “wizard music” and nothing to do, with “photo ops” in dark corners of the building.

The event organizer, LOL Event Group, has since deactivated its Facebook page and deleted all upcoming events on its website. According to VICE, the company wrote in a Facebook comment – which has since been deleted – that “we did not intent to come across as a specific Harry Potter event.”

“The event was intended to be a wizard theme, and we wanted to provide a fun magical experience,” the organizers said.

However, this contradicts what the organizers said earlier; the event’s description blatantly included Harry Potter-specific references. Additionally, on their Instagram page, organizers posted a screenshot of MTL Blog‘s preview of the Harry Potter-themed festival, thanking the blog for the “great media coverage.”

Attendees have since created a Facebook group with nearly 300 people dubbed “Cheated by LOL Event Group.” People shared their underwhelming pictures and experiences from the so-called “festival” and are letting others know how to receive refunds. Tickets were sold through Eventbrite, but when ticketholders reached out, they were denied a refund, with organizers responding that “we are sad to get this kind of feedback from our attendees” and “our team put a lot into the planning and execution of this event.”

Some are trying to receive refunds via Paypal or their credit card companies. The story has since been aired on local news channels and CBC Radio.