Bruno Mars and Janet Jackson will serve as the mainstage headlining acts at the upcoming edition of New Orleans’ Essence Festival of Culture.

The event, which will run July 1-5 at the Mercedes-Benz Superdome, will also welcome Janelle Monae, Patti LaBelle, Ari Lennox, Summer Walker, Swizz Beatz and more to the main stage. Additional artists slated to appear at the festival’s Superlounge include Jidenna, Doug E. Fresh, Rapsody, D Smoke, Demi Grace, Kitty Cash and over a dozen others. Comic Loni Love will host the concert series.

2020 marks 50 years of the festival’s founding publication, African American women’s lifestyle magazine Essence. In honor of the milestone, the event will expand its duration to five days from its standard three-day format.

“This is a milestone year for ESSENCE and our community as we celebrate 50 years of creating opportunities for our culture to shine and the role of Black women in making it possible for us to do what no other brand has done,” Essence CEO Michelle Ebanks revealed in a press statement. “To be able to say that at 50 years, we are Black-owned, diversified across media, technology, commerce and live events and impacting our culture in new and even deeper ways than ever before is a blessing – and one that comes with a tremendous responsibility to our community to continue to evolve, innovate and transform.”

Over the years, Essence Festival has welcomed names like Alicia Keys, Beyonce, John Legend, Diana Ross and Mary J. Blige to its stage. Last year’s edition featured former First Lady Michelle Obama following the success of her memoir Becoming and sold-out book tour. The magazine touted her presence as the festival’s “most exciting and extensive programming to date.”

The 2020 bash coincides with Janet Jackson’s newly-announced Black Diamond World Tour. She has played the festival twice before, while Mars will make his Essence Festival debut. 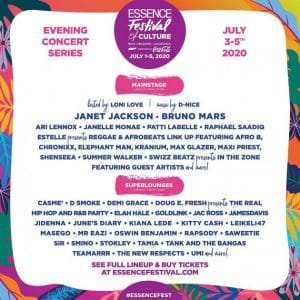