concerts577 Lauryn Hill9 Music414 Music Festivals141 Usher4
An impressive slate of R&B and hip-hop stars will all hit the stage at the very first Lovers & Friends Festival. The one-day bash...

Friends & Lovers Festival is produced by AEG-owned Goldenvoice, which oversees Coachella and other Southern California festivals. The company recently unveiled plans for another new festival, the 80s rock-filled Cruel World Festival, which will also take place at Dignity Health Sports Park a week before Lovers & Friends.

While Friends & Lovers Festival quickly drew enthusiasm over its star-studded lineup, a wave of backlash and confusion followed when Mase and Lil Kim claimed they never signed on to be in the lineup after it was announced they were performing. Fans also noticed that performers like Megan Thee Stallion have previous commitments on their schedule that conflict with the May 9 festival. Many saw the ordeal as a direct comparison to the infamous Fyre Festival, though Goldenvoice maintains that Friends & Lovers is not fake.

“Our festival is 100% confirmed. Lineups are always subject to change,” the promoter said in a statement provided to Variety.

Joe Kay, CEO of the festival’s sound provider Soulection Radio, backed the announcement on social media. Kay assured fans that the event is real, adding that all involved parties “do not condone fake/mock up line ups” and that details regarding the gig are “official and locked in.”

Tickets for the festival range in price from $145-$175 for general admission passes. Two tiers of VIP packages are also available for $230-$250 and $450, respectively. To ensure ease for getting tickets, Goldenvoice is offering a ticket payment plan that starts at $19.99 down.

See the promoted lineup below in the official Friends & Lovers Festival poster. 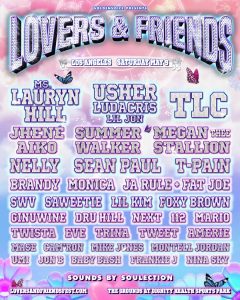