Top Comics Lined Up For ‘Netflix Is A Joke’ Comedy Festival

A slew of comedy giants will invade Los Angeles this spring as part of the inaugural Netflix Is A Joke comedy festival. Dave Chappelle, Whoopi Goldberg, Sarah Silverman, Jerry Seinfeld, Amy Shumer and more are on tap to perform at the six-day festival, presented by Netflix.

Over 100 performers comprise the lineup of shows, which will be held at various venues across Los Angeles. It all kicks off April 27 with a stand-up performance from Sebastian Maniscalco at the The Wiltern. Things kick into high-gear the following day with a dozen gigs across nine theaters, including back-to-back performances from David Letterman and Pete Davidson. The festival’s largest show is slated for May 2, when Chappelle takes center stage at the Hollywood Bowl for one performance only.

Some of Netflix’s most widely-streamed content will play a role in the festival. The cast of Schitt’s Creek will make a stop at the Orpheum Theatre May 1 as part of their Farewell Tour. The following night, Grace and Frankie stars Jane Fonda and Lily Tomlin will host a double festival showcase at the Hollywood Palladium.

Tickets are up for grabs via pre-sale on March 3, and are available to the general public on March 6. Fans should note that tickets are only available for individual performances, rather than multi-day festival passes.

See the full Netflix Is A Joke lineup below. 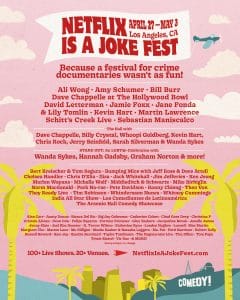