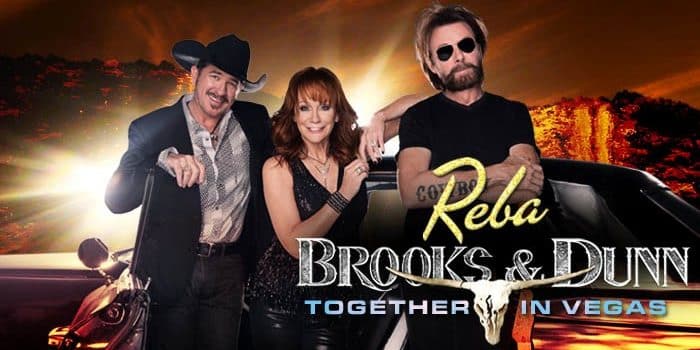 The Las Vegas entertainment scene continues to be darkened by the coronavirus pandemic, leading more residency shows to be cancelled or postponed. Reba, Brooks & Dunn: Together In Vegas is the latest residency to be impacted as the country superstars have revealed a batch of upcoming dates are now cancelled.

Reba McEntire and Brooks & Dunn were set to headline Caesars Palace Colosseum June 10-20 as their long-running joint residency continues. However, the headliners shared on social media that those dates are now scrapped and ticket holders will be receiving refunds. Reba, Brooks & Dunn are next scheduled to perform in Sin City this October and have their final round of 2020 performances scheduled for early December.

An update on our Vegas shows in June. pic.twitter.com/m2UllNDXyt

This marks the second stretch of performance dates the trio have had to alter. They were previously scheduled to perform in Vegas April 8-18 but are in the process of rescheduling those dates for when the Strip is back up and running.

Their individual performance schedules have also been impacted by the virus. Reba was supposed to embark on an arena tour in March that would run through this month, however, she promptly postponed the outing until July. Brooks & Dunn also pushed back their upcoming Reboot Tour. The duo were originally scheduled to hit the road this month and play North American amphitheaters throughout the summer, but will now perform from late August through October.