The iconic pop-rockers behind Goo Goo Dolls had to reschedule their forthcoming summer tour amid the coronavirus pandemic.

Originally, the tour was set to kick-off in Boise on July 23, followed by gigs in Chicago, Toronto, Boston, Philadelphia, and Nashville. They were slated to hit outdoor venues along the way like the Red Hat Amphitheater in Raleigh, the Bank of New Hampshire Pavilion in Gilford, and Holmdel’s PNC Bank Arts Center before wrapping-up at Los Angeles’ Greek Theatre early September.

However, in May, the group revealed that the tour would be unable to move forward as planned due to the virus.

“We’re truly crestfallen about having to move our tour, but you know we love you & need you to be happy & healthy,” the group said in a statement. “We can’t stay away from you for too long, so we WILL see each other again soon. Be safe & be well. We’ll keep in touch & keep you in our hearts. Keep us in yours.”

Now, the group shared rescheduled tour dates for 2021. They’ll hit the same cities and venues, starting with Boise’s Ford Idaho Center Amphitheater on July 22, 2021. The tour will wrap-up in Los Angeles on September 5.

Goo Goo Dolls will be touring in support of their 2019 LP Miracle Pill. Last year, they successfully toured in honor of the 20th anniversary of their best-selling record, Dizzy Up The Girl. 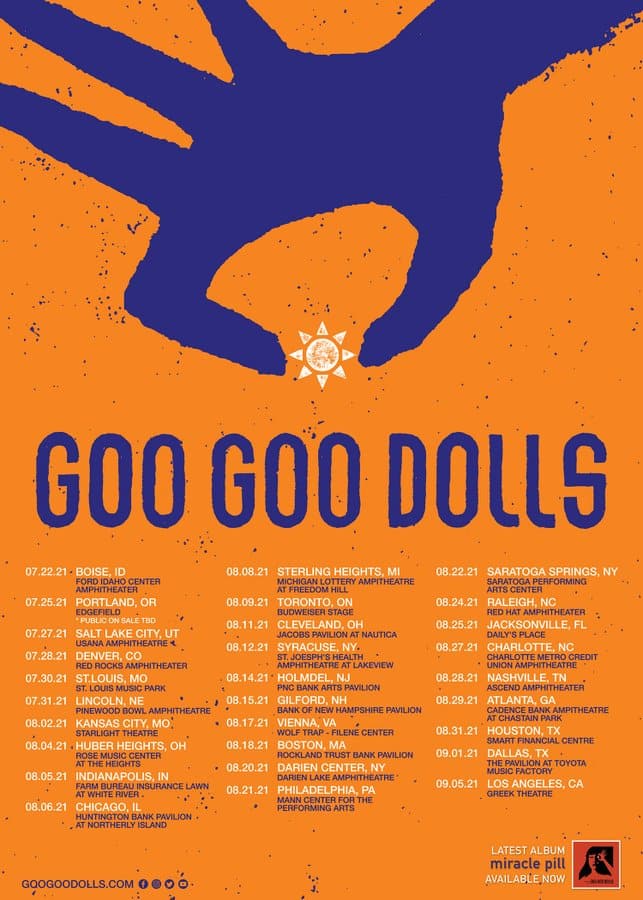