Packed Alan Jackson Show Forced To Turn Away Some Ticketholders

Country icon Alan Jackson experimented with the drive-in concert concept last weekend when he took over two farms in Alabama. But the shows hit a few snags when overcrowded parking forced some ticketholders to be turned away from the event.

Fans making their way to Jackson’s June 13 show at Oak Hollow Farm in Fairhope, Alabama faced an unforeseen delay when lightning within the area prohibited cars from entering the grounds. Traffic into the farm quickly backed up and caused many to enter late while fans like Caitlin Walters were ultimately not admitted into the fully-packed concert.

“I mean this was absolutely ridiculous,” Walters told local news outlet WKRG. “To have to sit in line for that amount of time to wait and not be told what’s going on and then to get there and not even be able to get into the show. That’s insane. The lady came and knocked on our window who we thought was going to check our tickets, only to come knock on the window to say sorry folks parks closed, the floor is closed, we have no more room.”

Other concertgoers expressed similar frustrations for how the show was organized to the heavy traffic that led to long waits into the venue. However, those in attendance praised Jackson for the show he put on. 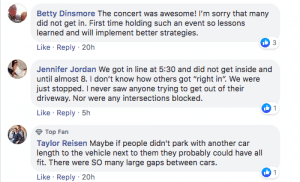 Nathan Baugh, an organizer with 46 Entertainment, revealed that implemented safety plans required a wait time of 30 minutes from the area’s last lightning strike, which formed a line of traffic that staff “never really could recover from.” As of Monday afternoon, roughly 100 requests for refunds had been made, WKRG reports.

Jackson had headlined his first Alabama drive-in show the previous night in Cullman. The shows were initially planned for June 5-6 but were postponed by a week due to inclement weather.