Billie Eilish ticket prices are catching some flack from the singers fans, as her Happer Than Ever World Tour tickets go on sale this week. Eilish, who announced her 2022 World Tour last week and used the Ticketmaster Verified Fan system to gauge fan demand and likely influence dynamic pricing decisions to maximize revenue, is getting some pushback over the prices they are seeing on the primary ticket market.

“I need a sugar daddy to pay for my Billie Eilish concert tickets,” writes @kayleigh_dill15 on Twitter. “I know these hoes are gonna be EXPENSIVE.”

“how can tickets go from 150$ to 457$,” writes @thehalalglow, sharing a ‘weary face’ emoji alongside it. @sxftgws chimes in with “billie eilish tickets are dumb expensive and i want to sob my eyes out.” 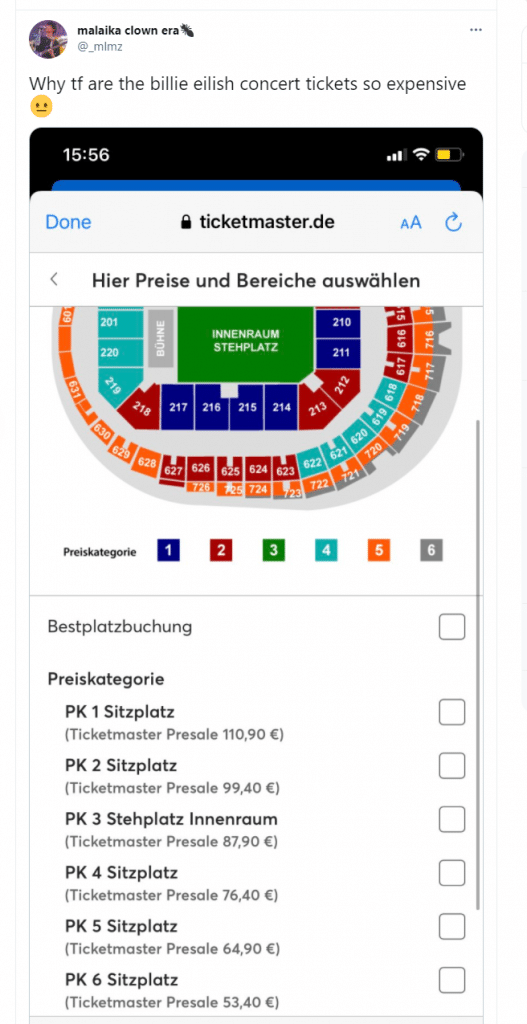 It’s a reality as old as concerts themselves, that artists often price their biggest fans out when they begin to make it big in music, as Eilish undoubtedly has. But a number of complaints have been raised over the fact that the singer cancelled an entire tour where most of these fans had purhased less expensive tickets, due to COVID-19, rather than postponing it and letting those holding the tickets come to the new dates at the same price.

Instead, the slate was wiped clean, replaced with a tour that has a much higher base price, as well as indications that prices will rise during today’s general sale when traffic is at its highest, giving her fans mere minutes to decide whether they want to spend every dollar the Ticketmaster algorithm thinks they’re willing to part with, or hope for the best on the secondary market.

“Ticket  prices may fluctuate, based on demand, at any time,” warns the Ticketmaster page as the minutes tick down until the general sale launched.

In practice, this means that when fans flood the system, the system will respond by moving prices up to whatever its massive trove of user data believes they can or will pay. This also means that there is no real meaning behind any published Billie Eilish ticket prices, because those numbers can change at any moment.

Systems like Verified Fan are also used to fuel this dynamic pricing machine, requiring access to even more user data and allowing profiles to be developed on the average fan and their means, in order to better determine maximum pricing. It also creates an at times artificial impression of overwhelming demand, allowing prices to be enormously high at initial onsale, even if supply is plentiful due to promoter holdbacks that will be released in small amounts as the show approaches.

One need look only at the Taylor Swift tour that weaponized Verified Fan to push prices to the stratosphere by implying there was no other option to secure access than pay whatever the dynamic pricing asked, only to see many performances dump tickets to fill the building, even for free, as showtimes approached.

Press in the UK has already taken notice of the fans anguish over these dynamically priced tours, which render the concept of “face value” moot.

With general sales occuring today for the U.S. dates for Billie Eilish’s tour, there are decent odds we’ll see similar types of ink spilled in coming days on this side of the pond.

Ultimately, this is the way that the primary market operates on a tour of this caliber these days, particularly in the wake of a pandemic that halted revenue for over a year for these artists (though Live Nation stock is at an all-time high). Hopefully for Eilish fans, they aren’t plagued by buyers’ remorse if they pay the dynamic-pricing tab this week, only to see tickets available for far less on secondary markets as show dates draw near.

TicketNews is partnered with ticket resale marketplace Ticket Club, which helps fans save over other resale marketplaces by offering tickets with no service fees for members. Redeedm a free one-year membership courtesy of TicketNews by signing up using this link: https://www.ticketclub.com/compare/ticketnews. Check Billie Eilish ticket prices for members here.