Adele31 BST Hyde Park0 ticket prices69
Anticipation is very high for next year’s return to the stage by Adele at Hyde Park. But so are the prices – and fans...

Anticipation is very high for next year’s return to the stage by Adele at Hyde Park. But so are the prices – and fans are sharing their grief on social media. Adele ticket prices for the July performances were released Thursday, and some could scarcely believe the range, which starts at £90.45 (approximately $125) and go all the way to £579.95 (approx. $800), not including fees.

“Working class people made you famous…,” wrote one fan on twitter in the response thread to the ticket price announcement from her official fans account. “These tickets are not priced for working class people.”

The figures were treated as something of a fait accompli by some in the twitter thread, but subject to quite a bit of anger and mockery by many.

579 quid? For that I’d expect a Beatles reunion, followed by Elvis and supported by Prince and Jimi Hendrix.

Beyond the pricing concerns, many were upset over their belief that the singer seems to have forgotten about promises to fans who had tickets to her final London performances in 2017 that were cancelled due to vocal cord issues. At the time of those shows being cancelled, ticket holders were reportedly promised priority access to her next show in the area – but apparently that promised wasn’t honored in the presale plans for BST Hyde Park – though it is entirely possible that may be remedied if and when Adele releases expected plans for additional performances in support of her new album out this fall.

“Dear @Adele, I was one of the unfortunate fans that had a ticket for 1st July 2017 show at Wembley Stadium, which you cancelled due to health concerns,” one fan wrote on Twitter. “I was under the impression I would get priority access to your next set of shows in the UK, but I’ve heard nothing of the sort.”

“Hi, back in 2017 you told us we’d have priority for the next shows due to the Wembley gigs being cancelled, so is that in place for the Hyde Park ones now? Thanks,” another fan tweeted to the ‘Easy On Me’ singer.

For those who bite the bullet and purchase tickets, perhaps the largest concern should be that it appears event organizers plan to completely restrict resale using paperless ticket technology. So after paying hundreds of dollars for tickets to an event more than eight months away, consumers will be stuck with no options to legally recoup any of their price paid due to the artist and promoter stripping the ability to resell tickets under threat of cancellation.

“Your ticket/s will IMMEDIATELY BECOME INVALID if resold OR OFFERED FOR SALE,” reads a warning on the presale offer emailed to consumers. Tickets will be issued in a strict electronic format, accessible only through the official app (which undoubtedly will require access to huge amounts of consumer data as part of the opt-in). Such restrictive resale policies are becoming more and more the norm in places where authorities haven’t made such policies unlawful to protect consumers – and even in some places like New York that have. 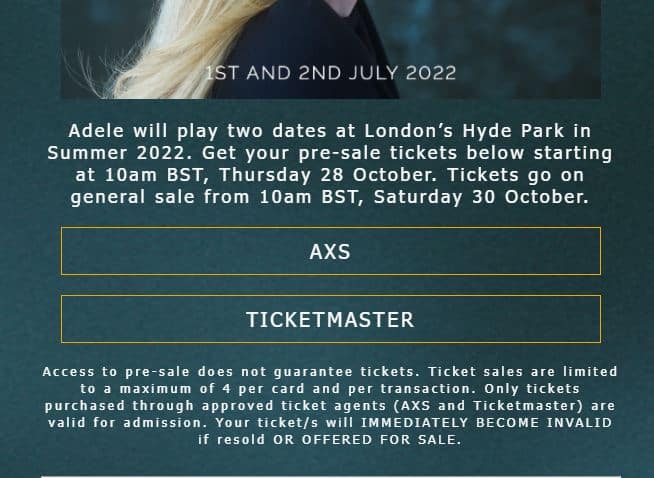 The fan presale for Adele at Hyde Park has already seen its allocation sold out, according to both AXS and Ticketmaster. There is an American Express presale tomorrow (Friday) with plans for general sale on Saturday. Undoubtedly all will quickly sell out, with additional tickets dripped out throughout the next 10 months in order to keep up the appearance of enormous demand despite the high prices, necessitating the restriction of resale to keep from prices being moved down by having to compete with those listings.