Green Day, Nine Inch Nails, and My Morning Jacket have been announced as the headliners of the 2022 Shaky Knees Festival in Atlanta, with tickets on sale now. The festival is scheduled for April 29-May 1 at Central Park in the city, marking a return to its traditional spring timing after running in the fall this year (and its cancellation due to COVID in 2020).

Tickets for Shaky Knees Festival 2022 are already on sale at the event website, with one day and three-day access options. General Admission passes started at $179 plus fees, but that first tier has already sold out and prices are now at $205 plus fees. GA+ ($380), VIP ($700), Platinum ($1,700) and Ultimate ($7,500) passes are also on offer for 3-day access. Single day passes start at $100 plus fees, ranging up to $900 for the platinum level of access. Details as to what each level offers to festival attendees are available at the event website.

“Taking the fun down to Atlanta, Georgia!” tweeted Green Day after the announcement of their spot atop the bill on Wednesday. They will perform on Friday, April 29 at Shaky Knees. Other acts performing that day include Billy Idol, Rainbow Kitten Surprise, Spoon, Highly Suspect, Travis, and Godspeed You! Black Emperor.

Taking the fun down to Atlanta, Georgia! Headlining @ShakyKneesFest on April 29th 😎🎶 tickets on sale tomorrow at 10am ET https://t.co/XU3HhwKb2h pic.twitter.com/jCkhIeRKZR

Saturday’s slate is topped by Nine Inch Nails, with Chvrches, King Gizzard & The Lizard Wizard, Mt. Joy, Kurt Vila & The Violators, Japanese Breakfast, and Gang of Youths also on the bill. Sunday’s closing day is headed by My Morning Jacket, who are joined on the day by Khruangbin, Death Cab for Cutie, Coin, Biffy Clyro, Pup, The Garden and more. The full lineup of performers is available on the event website (and the image below). 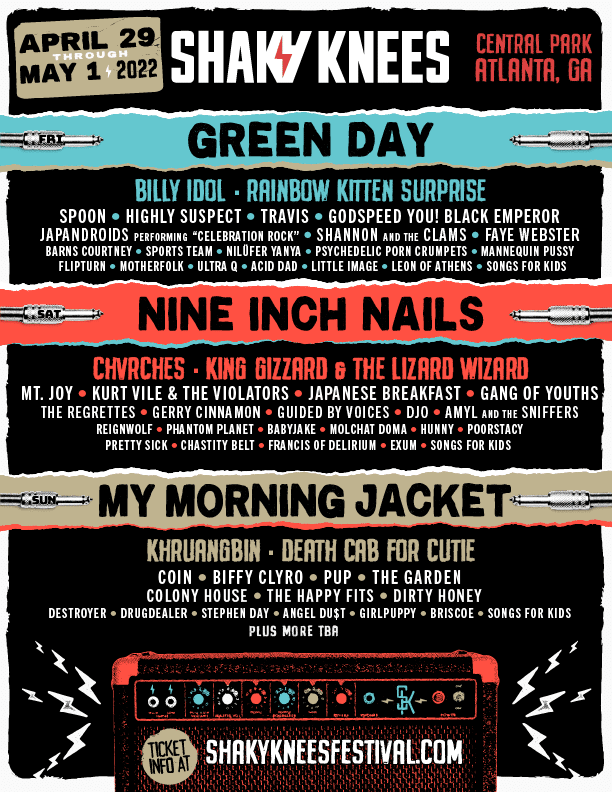