Netflix is a Joke Festival Announces “Unprecedented” Lineup for 2022

After COVID-19 derailed its first attempt in 2020, Netflix announced a 2022 Netflix is a Joke Festival, set to take place in Los Angeles over an 11-day span in the spring of 2022. Produced by Netflix and Live Nation, the festival promises more than 100 live shows at more than 25 venues, running from April 28 to May 8, 2022.

Tickets for Netflix is a Joke Festival are on sale beginning Friday, December 10. Presales began on December 7.

“It’s absolutely thrilling for Netflix to be hosting a comedy festival of this magnitude in Los Angeles,” said Robbie Praw, Director, Stand-up and Comedy Formats, Netflix. “We were so disappointed to postpone the event last spring and our line-up of comedians can’t wait to bring much needed laughs to audiences in LA and around the world on Netflix. Netflix Is A Joke Festival is going to give comedy fans the opportunity to see the greats and discover new voices in one of the greatest cities in the world.” 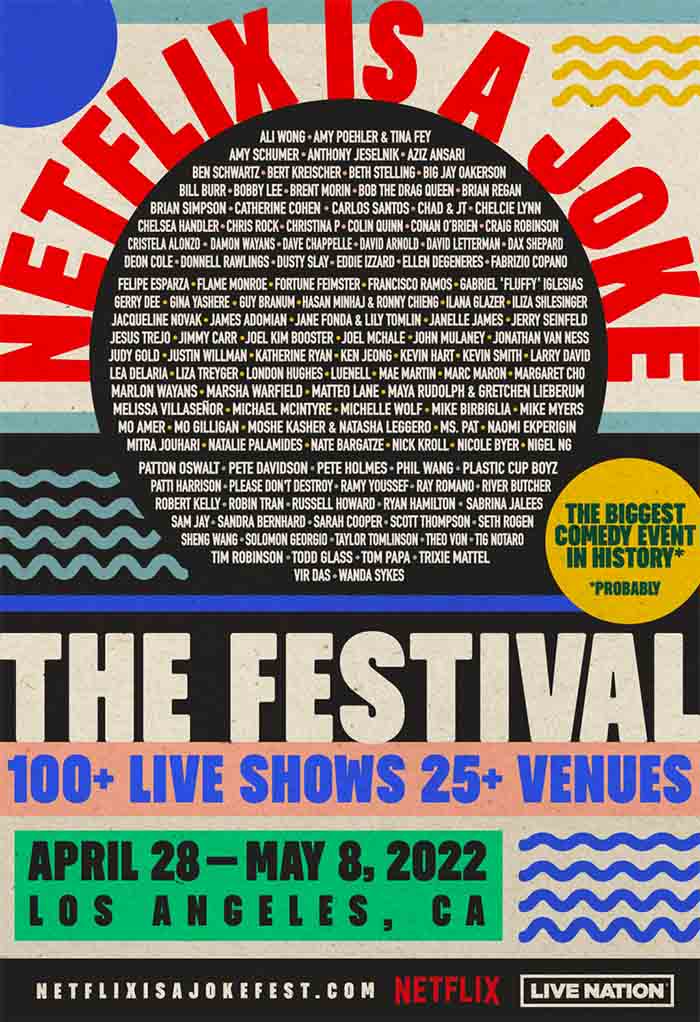 At least some of the performances are to be recorded, with plans to be streamed on the platform later.

The full “highlights” promoted by Netflix include:

Gabriel “Fluffy” Iglesias (recorded) Making LA history, Gabe will be the first stand-up comedian to ever perform at Dodger Stadium. He will record his newest Netflix special in front of tens of thousands at his home team’s baseball park.

Tina Fey and Amy Poehler In Conversation- See the Emmy Award-winning pair in a freewheeling chat that only these two good friends and comedy veterans could have.

That’s My Time With David Letterman (recorded) Legendary late night host David Letterman returns to his roots to showcase some of today’s finest stand up comedians to perform and then join him for a one-of-a-kind interview.

THE HALL: Honoring The Greats of Stand-Up(recorded) Anchoring the closing night will be a night filled with today’s best in comedy paying homage to pioneers George Carlin, Richard Pryor, Joan Rivers and Robin Williams. The Hall and induction ceremony special were created by award-winning director/producer Marty Callner and producer Randall Gladstein. Callner will direct and executive produce through his Funny Business, Inc. shingle. Gladstein and award winning producer/manager, David Steinberg will also executive produce. The Hall will have a physical home in a newly designed wing of the National Comedy Center in Jamestown, New York.

Netflix Is A Joke at The Palladium Hosted by Amy Schumer (recorded) Powerhouse comedian Amy Schumer will host an epic night with some of today’s most talented comedians.

Seth Rogen’s Table Reads: For four nights live from the Orpheum, Rogen will curate and host unforgettable evenings featuring his friends and Netflix stars reading scripts from his favorite tv shows and films. All proceeds will go to HFC (Hilarity for Charity), whose mission is to care for families impacted by Alzheimer’s disease, inspire the next generation of Alzheimer’s advocates, and be leaders in brain health research and education.

Iliza Shlesinger: Back In Action

Theo Von: Return of the Rat

50th Anniversary of The Comedy Store: Netflix is a Joke in partnership with The Comedy Store, who first opened its doors in 1972, will be presenting a slate of programming throughout the festival, celebrating 50 years of the iconic Los Angeles comedy club. Full details to be announced soon.

Princess featuring Maya Rudolph & Gretchen Lieberum: SNL vet Maya Rudolph and LA singer-songwriter Gretchen Lieberum are PRINCESS, a Prince cover band. The two have been singing together since college but it was only recently that the duo turned their mutual adoration for Prince into a musical project. Born out of their collective, life-long obsession with Prince, each performance is a love letter to the Artist himself. Don’t Worry, They Won’t Hurt U… They Only Want U 2 Have Some Fun.

KEVOLUTION: An Evening with Kevin Smith: From almost dying of a massive heart attack to almost getting killed online over his “Masters of the Universe” cartoon, Kevin Smith is a survivor. In this followup to his last comedy special SILENT BUT DEADLY, the pop culture gadfly will pleasure you with his mouth, telling tales of his unexpected journey down the road to wellness