Adele34 Caesars Palace11 The Colosseum at Caesar's Palace5 Weekends With Adele15
Some of Adele’s biggest fans are venting their frustration online in the wake of the singer’s last-second decision to postpone her entire run of...

Some of Adele’s biggest fans are venting their frustration online in the wake of the singer’s last-second decision to postpone her entire run of shows in Las Vegas, announced last week just hours before the first show was to begin. The singer blamed the postponement of the highly-anticipated and high-priced run on COVID issues within the production, but many have questioned how such problems could derail the shows at such a late date.

Many were incensed over the fact that the cancellations happened so late that some fans were already in Las Vegas or were literally on the way there when the news broke.

“I was furious that Adele waited so last minute to make this call,” one ticket holder, Gillian Rowland-Kain, 32, told the BBC. “I recognize it’s not a call any artist wants to make, but she would’ve known yesterday that the show wouldn’t be ready by tomorrow. Her lack of notice is astounding. I’m angry and frustrated.”

Others took to social media to vent their frustrations.

“Hi Adele! It’s my bday and I’m on an airplane rn using the last of my vacation time for a whole year to see you along with some non refundable deposits and a week of babysitting,” wrote one fan on Twitter in the thread below Adele’s teary announcement of the delay. “I guess we will miss your new dates. I’m sad you couldn’t decide this until the last minute.” 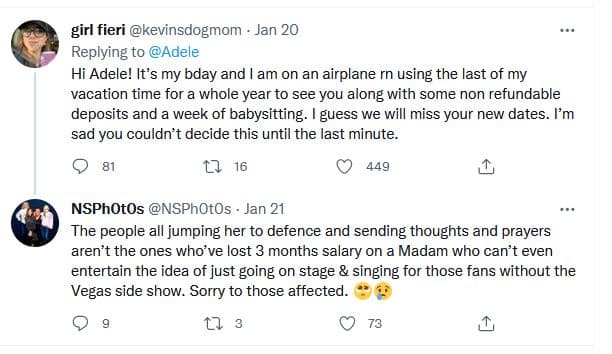 “This breaks my heart, for you and for me,” wrote another.  “I know how hard it is to put on a show, especially with a pandemic. But it’s also hard to save enough money, to get time off work from a hospital, that is short staffed, book a flight and hotel, fly in two days early and find out 30 hrs before the show, when we are already here, that the reason we came for is not going to happen. The people with first weekend show tickets may not be able to afford the time or money to reschedule something like this.” 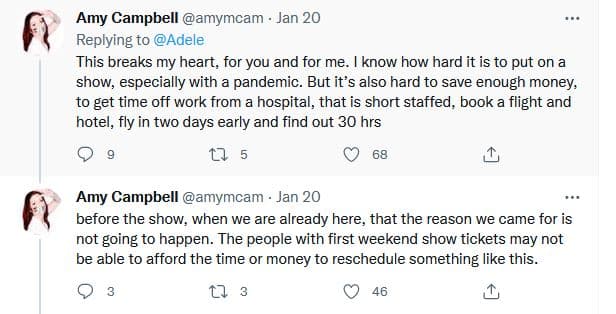 “Crocodile years love…..,” one wrote. “You’ve got so much form for this that many people aren’t surprised. You would have known weeks ago that it was unlikely, and yet you’ve left it so late people were already on their way. Now is the time to do more for your fans.” 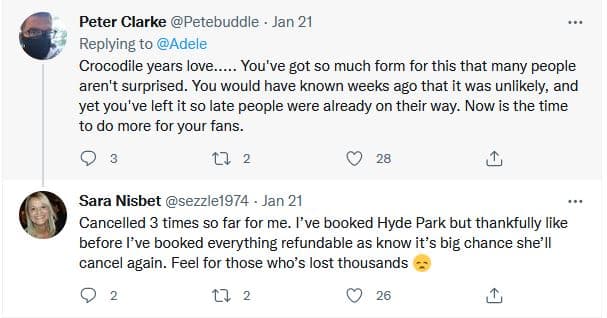 The singer apparently attempted to mend some fences with some fans – having members of her team pull aside fans in Las Vegas browsing her “Weekends With Adele” merchandise at the venue after the shows were called off and they had some time to kill to video chat with the singer from her Los Angeles home. But for many, the singer’s history of late cancellations has made this one sting all that much more.

Until her team sets the reschedule dates for her residency, Adele fans cannot request any refunds from the event, as any refunds made available by promoters would be handled when the rescheduling plans are finalized. For an event where “verified fans” were often charged sky-high “platinum” prices by the singer at the initial purchase and resale tickets have been going for an enormous premium, that means many are likely out thousands if not tens of thousands until further notice while this is all sorted out.

For those who happened to book hotel stays at Caesar’s Palace alongside tickets to the show, the casino promised full refunds would be available for those who cancel their reservations, including those made on short notice for the opening weekend. That won’t help any for airline issues, nor for those who booked stays at other venues, but at least it’s something for those impacted who happen to be lucky enough to take advantage.

For now, it’s mostly a waiting game for those who still hope to see Weekends With Adele. Tickets are available on ticket resale websites, but with no dates specified, it is hard to imagine the market being particularly strong, effectively throwing a dart at the calendar if you buy between now and the shows being rescheduled in terms of when you might be buying tickets for.

Those interested in seeing if they can score a deal while things are in limbo can find resale tickets at the following links: