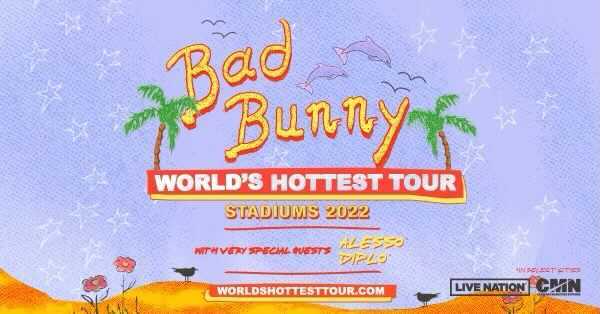 Bad Bunny, who begins performances on his El Ultimo Tour Del Mundo arena tour in February, has announced another run of shows, also in 2022. Bad Bunny: World’s Hottest Tour was announced Monday, produced by Live Nation and CMN in the U.S. with dates beginning in August.

Tickets for Bad Bunny: World’s Hottest Tour go on sale to the general public on Friday, January 28 at 12 p.m. local time. Presales will also be available at many of the locations for Bad Bunny through the artist, venue, and promoter web pages. His El Ultimo Tour Del Mundo was a quick sellout when it was announced in the spring of 2021, crashing primary sale websites due to demand in one of the first signs of the pent-up demand that existed for shows that were being put up after the long COVID-related halt on large-scale events.

“This announcement is a clear representation of Bad Bunny’s extraordinary  growth as a global superstar,” reads the tour announcement from Live Nation. “There is no doubt that after such success, “Bad Bunny: World’s Hottest Tour” in stadiums with an all new production will continue to elevate the artist’s career to new transcendental levels.”