Groupon4 katy perry17 StubHub83 Ticketmaster772 Witness Tour3
Katy Perry is having a not-so-great year, to say the least. Her album broke records and she made a good deal of headlines- neither...

Katy Perry is having a not-so-great year, to say the least. Her album broke records and she made a good deal of headlines- neither were positive. Now, ticket sales for her upcoming Witness Tour to promote her album of the same name were so poor that Ticketmaster, the primary seller, has been forced to drastically reduce the face value. If that wasn’t bad enough, they’ve also listed Witness tickets on discount marketplace Groupon for half off of their original price.

Tickets are still largely unsold on Ticketmaster, and are notably inexpensive compared to shows by similar artists in the same venues. On the secondary market, tickets are going for just a few bucks a piece. Below are the tickets currently on sale for her stop in Milwaukee at the BMO Harris Bradley Center on December 4. On the left is Ticketmaster, and right is StubHub, where re-sellers are desperately seeking to push their inventory at a loss. 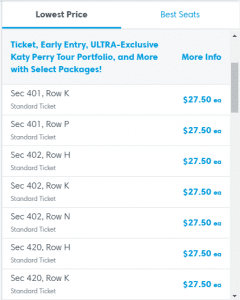 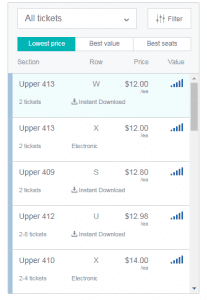 Perhaps the saddest sight of all, though, is Katy’s tickets advertised on discount site Groupon for 51% off their original price.

She pulled some wild publicity stunts before the release of her fifth studio album, Witness: re-surfacing a years-old conflict with fellow pop star and former friend Taylor Swift, performing a very bizarre and very cringe-worthy Saturday Night Live performance of her single Bon Appétit with rap group Migos, and live-streaming her life for 96 hours straight, including sessions with her therapist, for the world to see.

Sadly, it seems her efforts went unrewarded. Anticipation for her album helped it debut at No. 1 on Billboard and iTunes, but it quickly and consistently fell ever since. In fact, it had the greatest second-week sales drop for a #1 debuting female album in history, with sales falling a whopping 89%. Big name features like Migos, Skip Marley, and Nicki Minaj helped the album’s singles stay relatively afloat on the charts, but they certainly could not save the album’s failure overall.

Katy’s losses don’t stop there; she recently hosted the MTV Music Video Awards, cracking jokes to an audience that remained mostly silent and uncomfortable. Her dry try at television was so bad that American Idol executives, who had just signed her on as a judge for the show’s reboot, were rumored to be second-guessing their decision. No official news has been announced to confirm or deny.

If you find a long-lost $20 in a pair of jeans, or maybe want to dig up some coins from inside your couch, the Witness Tour kicks off on Monday in Philadelphia. For a sneak peak at the antics that may take place on stage, check out the trainwreck of an SNL performance that Katy gave before her album release; so hard to watch, so hard to look away.