bankruptcy3 Billy McFarland18 Fyre Festival16 Fyre Media3 Ja Rule9
In another twist of the saga related to the now-infamous Fyre Fest, Ja Rule may be on the hook for the debts related to...

In another twist of the saga related to the now-infamous Fyre Fest, Ja Rule may be on the hook for the debts related to the imploded festival from April of 2017.

Gregory M. Messer, appointed trustee in the liquidation process, has asked Judge Martin Glenn to require the co-founders, Billy McFarland, and Ja Rule – real name Jeffrey Atkins – to be responsible for the over $530,000 in loans borrowed to operate the event, reports Law360.

For those unfamiliar with the case, Fyre Fest was advertised as a two-weekend luxury music festival in the Bahamas complete with top-shelf liquor, catered meals, and fully furnished living spaces. Tickets cost thousands of dollars apiece, but promised the “cultural experience of the decade”. In reality, guests arrived to little food or water, disaster relief tents, and unsafe conditions, and waited hours or in some cases, days to be escorted off the island.

Fyre Fest was placed into bankruptcy in August, and McFarland made headlines for months about civil and criminal lawsuits, not-guilty pleas, fed-up attorneys, and even an event ticket scheme.

Atkins, the famous name attached to the festival management as co-founder to go with business operator McFarland, has been largely left out of the scandal to this point. He told fans immediately after the Fyre implosion that the failure was “NOT [HIS] FAULT”, and counsel for Atkins said at a hearing for McFarland’s criminal case that his “role was primarily to bring the artistic idea to life,” and that he was uninvolved in the business side. 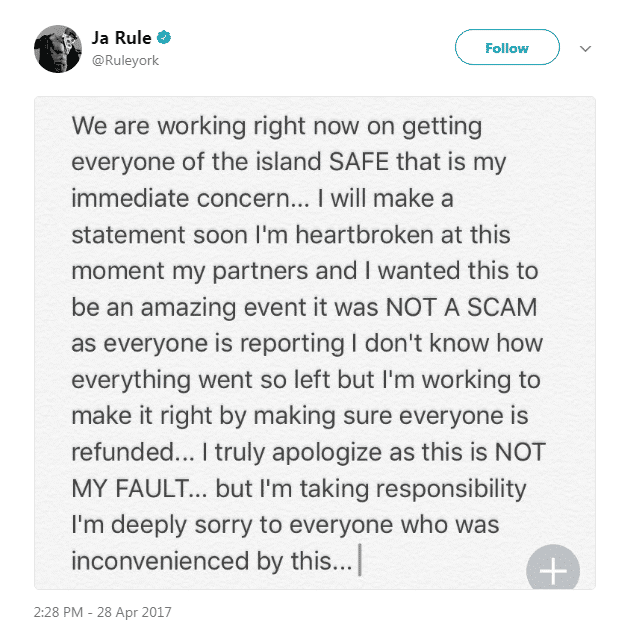 However, both McFarland and Atkins face dozens of lawsuits, including a $100 million class action suit. Messer filed motions last week asking the court to allow him to designate co-founders Billy McFarland and Ja Rule as the “persons responsible for performing the obligations of the debtor” and demand that they hand over bank records, company ledgers, and “information from all of the parties in order to put together an accurate snapshot of the debtor’s finances in the run-up to the Fyre Festival debacle”.

The motion “would also allow Messer to go after the pair — who have apparently not responded to the bankruptcy case at all since it was filed — for civil or criminal contempt of court, and refer the case to the U.S. trustee for a criminal investigation.”

“There’s really no way to get this moving other than to get some motions on file, and compel the principals to do as required under the code and turn over the books and records,” Fred Stevens of Klestadt Winters Jureller Southard & Stevens LLP, special litigation counsel to the trustee, told Law360.

Dave Brooks at Amplify also reported on this case, which you can read here.