Washington’s Northern Quest Resort & Casino is expanding their summer concert venue, increasing the capacity of the venue by approximately 1,000 seats.

This past Saturday, Northern Quest released a video on their Instagram page, showcasing additional grandstand seating.

According to KREM, representatives said the venue will allot 5,000 seats with “more views” of the stage. On the Northern Quest website, concert-goers can see blog posts detailing the expansion, along with more information about various other additions to the casino, like a new shopping center and outdoor patio.

The Northern Quest Pepsi Outdoor Summer Concert Series is set to kick off this June, starting with Little Big Town on June 18. Other performers include Incubus, John Fogerty, Brad Paisley, ZZ Top, Willie Nelson with Alison Krauss, and Gabriel Inglesias. There will also be a special show from the “I Love The ’90s Tour,” featuring Salt-N-Pepa, Vanilla Ice, Sir Mix-A-Lot, Color Me Badd, and Young MC.  Train, Alabama, Kane Brown, The Australian Pink Floyd Show, and Joan Jett will play throughout the late summer weeks, ending with Rascal Flatts on September 22.

Huey Lewis and The News were scheduled to play the series on August 19 with Richard Marx, but due to Lewis’ ear injury and possible Meniere’s disease, the group was forced to cancel all shows on the rest of their tour. It is undetermined if another artist will take the band’s place at this time, but refunds are available.

This year, the casino is promoting the series with the hashtag #QuestSummerEver. Tickets are now available for each of the events. Each concert will take place at Northern Quest’s Outdoor Stage in Spokane, Washington. Check out the full list of dates below. 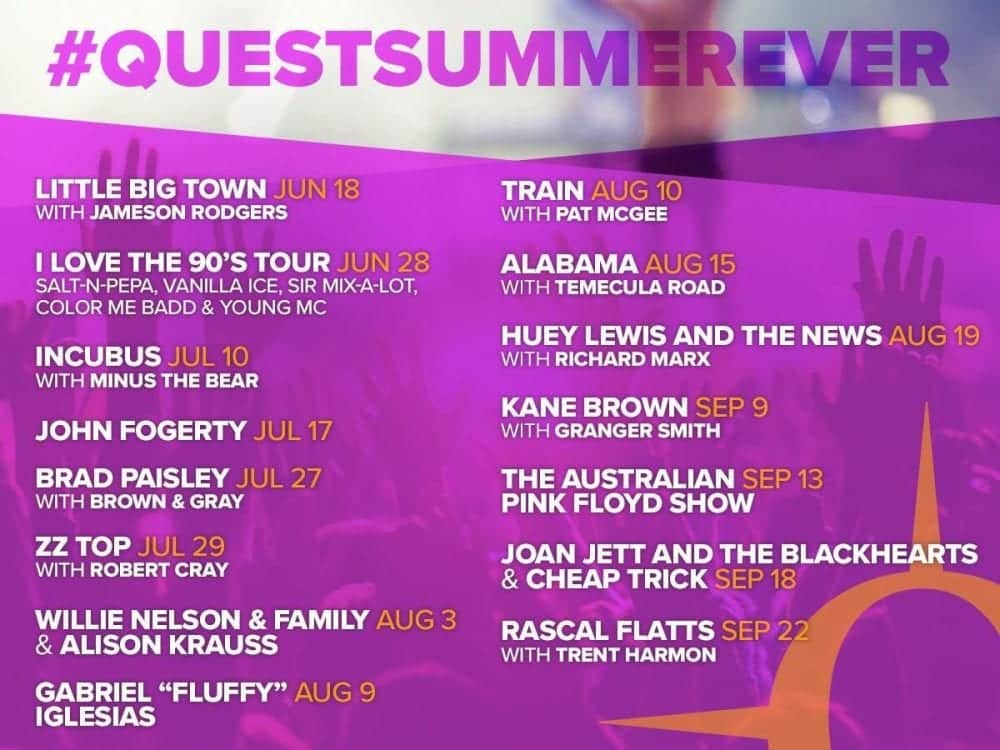 July 10 — Incubus with Minus The Bear