Robert Smith1 Vista Equity Partners3 Vivid Seats66
Billionaire Robert Smith has agreed to pay $140 million and admit wrongdoing for his part in a massive tax evasion scheme, part of a...

Billionaire Robert Smith has agreed to pay $140 million and admit wrongdoing for his part in a massive tax evasion scheme, part of a deal that will allow him to avoid prosecution, according to Bloomberg. Smith is CEO of Vista Equity Partners, which owns a substantial stake in Vivid Seats.

His tax troubles arose from a $1 billion investment in Vista’s first fund two decades ago by an offshore foundation tied to Robert Brockman, a Houston software businessman, people familiar with the matter have said. The Justice Department and Internal Revenue Service have been investigating whether Smith failed to pay U.S. taxes on about $200 million in assets that moved through offshore structures tied to Brockman, those people said.

Brockman, a fellow billionaire from Texas, was indicted this week by a federal grand jury on 39 charges including tax fraud, wire fraud, evidence tampering and money laundering. The alleged $2 billion tax scheme Brockman was charged with is the largest brought against an individual in the United States, per the Washington Post.

Smith was allegedly considered a co-conspirator in Brockman’s scheme, but served as a witness in the investigation that brought about the charges this week, hence his immunity from prosecution.

Smith is the founder of Vista Equity Partners, a San Francisco-based private-equity fund that had a single investor: Brockman. According to prosecutors, Smith helped Brockman hide his profits earned through Vista in offshore accounts so he could avoid paying taxes.

In a news conference, Anderson, the U.S. attorney in San Francisco, said that Smith signed a non-prosecution agreement, where he admitted to his part in the scheme and agreed to cooperate with investigators. He also acknowledged evading $43 million in federal taxes from 2005 to 2014 and accepted a settlement to pay about $140 million in taxes and penalties. 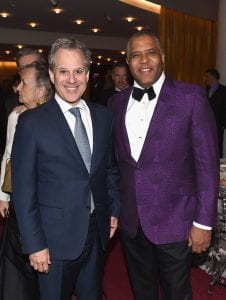 It is unclear what impact this explosive news will have on Vista or, by extension, Vivid Seats. The Chicago-based ticket resale operation touts itself as an independent operator, but counts both Vista and GTCR as private equity firms backing it.

Smith and his wife Hope donated $60,000 and $65,100 within two months to Schneiderman’s campaign, which also received a $65,100 donation from Vista co-founder Brian Sheth. Fifteen additional donations – almost all for $10,000 – were made by Vista employees to Schneiderman between 2017 and 2018.The news of Smith’s involvement in the complicated tax dodge raises new questions regarding a string of donations that he and numerous other Vista principals made in recent years to since-disgraced New York prosecutor Eric Schneiderman. Nearly $380,000 was donated to Schneiderman’s campaign between late 2015 and his 2018 resignation amid allegations of abuse brought by several women either by Vista executives or lawyers from Kirkland & Ellis, a law firm which represented Vista on its acquisition of Vivid Seats.

Prior to his fall from grace, Schneiderman had spent extensive energy on the ticketing world, vocally opposing the extension of the existing ticket resale laws in the state (which have since been extended). A tip received last year by TicketNews implicated that the pattern of donations involved a concerted effort to get the then-Attorney General to leave Vivid Seats out of its enforcement actions related to secondary ticketing.

Neither Vista nor Vivid Seats responded on record to requests for comment on the donations, aside from threatening legal action against TicketNews but declining to offer any refutation of facts presented in the story.

Schneiderman’s successor, Letitia James, agreed to a settlement with TicketNetwork and Ticket Galaxy in 2019 and put the matter to rest, while Vivid Seats avoided prosecution entirely in the matter.

With the new information about Smith and the very nature of Vista Equity Partners coming to light, it will be interesting to see what impact, if any, Vivid Seats faces while simultaneously attempting to survive the near-complete halt of ticketing and live events amid the pandemic.