Beyonce and Jay-Z’s highly anticipated On The Run II Tour was in high demand for weeks after their joint announcement, however the “power couple” has received some criticism for struggling to fill seats throughout the trek.

The duo currently has thousands of unsold seats for shows in the UK. This past weekend, they performed in Glasgow and since the audience was not full, fans reported that they were handed free tickets or received upgrades for no cost. One fan took to Twitter, claiming that people were just giving them away to fill seats.

According to Mirror, a handful of fans outside the Glasgow show claimed they were given free seats, or their seats had been upgraded for free.

“The concert rate was empty,” one fan wrote. “They knew the concert wasn’t going to sell out and already had curtains set up before the show to cover the empty sections.”

Fans are defending the couple, saying that these claims are not true, but there’s evidence that the tour is struggling during other shows as well. Last week, before playing in Cardiff, fans were upgraded to VIP section seating for free, although superfans had paid around £400 for the same spots. 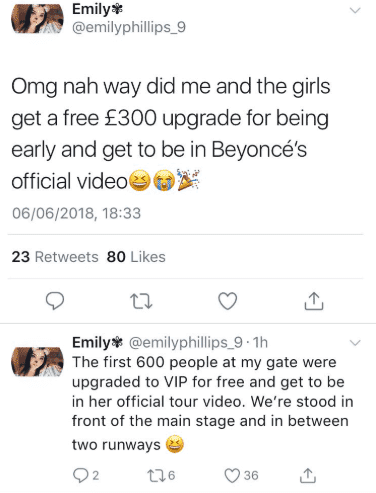 These aren’t the only signs pointing to a major tour sales slump; the tour is offering tickets to concertgoers in Europe simply for performing a charitable act. Good Morning America reports that the couple teamed up with The Prince’s Trust and Global Citizen, allowing fans opportunities to win general tickets and be a part of an auction to receive VIP tickets. Additionally, 1,600 fans at Vanderbilt University in Tennessee who are with the incoming class of 2022 are going to the show for free.

Similar to Taylor Swift’s Reputation Tour, the strategy to remove the secondary market with a skewed pricing model has led to price drops and giveaways, just to keep the house full.

Tonight, Beyonce and Jay-Z will play at Manchester’s Etihad Stadium, which will be followed by a pair of shows at London’s Olympic Stadium on Friday and Saturday. As of this morning, there are still hundreds of seats left for each of these shows.

After London, the On The Run II Tour will make stops in France before heading to North America, kicking-off on July 25 in Cleveland, Ohio. Out of the 46 remaining dates have, only 9 have sold out.