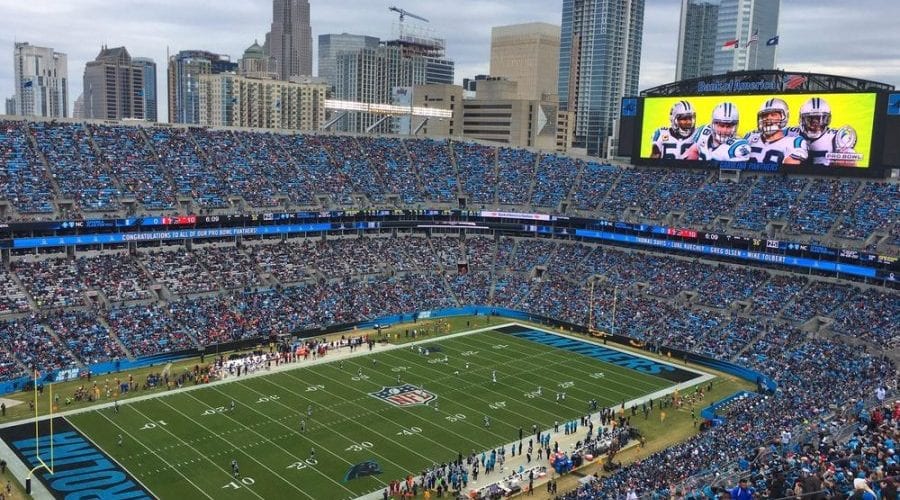 Mobile tickets have been causing more and more issues at sports games across the country, so essentially, Panthers fans were frustrated with the new ticket policy at the team’s first preseason home game over the weekend.

During the game on Friday night at Charlotte’s Bank of America stadium, officials were not accepting any paper tickets to embrace the new digital policy. However, many fans faced diffiulties at the gate, since many older people do not understand how to use their phones or access tickets. It also doesn’t help that part of the system was down Friday night. Usually, fans just have to downlaod the Panthers or Ticketmaster app to access tickets, but workers directed fans to access their seats through the web browser instead. Issues still arose as the connection speed was weak.

“The internet is a little rough out here,” fan Ty Allison told WBTV.

Other fans took to social media to express their trouble getting into the stadium:

Just talked to a Panthers fan who struggled to get into the game tonight, the first all-mobile ticket game at BoA. (Which is why the stadium looked like this at kickoff) pic.twitter.com/PMr9NaUmr0

The scanners couldn’t scan phones or paper tickets. We were at the front of the first to go in and it took 20 minutes for the ticket scanner to scan us in after having to get 2 orange shirts and a supervisor to help us.

Rough night for the Panthers. Off the field, fans couldn’t get tickets online because the site crashed. Then security ran out of bag tags, so @pastorofpain and I missed kickoff standing in line waiting and frying like eggs on the asphalt.

System down and can’t receive transferred tickets. Gonna let everyone in for the bills preseason?

@Panthers the absolute worst fan experience possible with this mobile ticket debacle. Took forever to get in stadium and missed kickoff. Thanks! @NFL #mobileticketing #panthers

The Panthers, alike various other NFL, MLB, and NHL teams, have gone completely digital. This isn’t the first time fans have been annoyed with the process – many fans had issues with the Browns Mobile App during the team’s preseason game earlier this month, causing them to miss kick-off. The switch to mobile-only ticketing is an attempt to prevent fraud and make it harder to sell fake tickets, while also allowing faster entry into venues. Nonetheless, at nearly every game or concert venue, people are complaining about mobile tickets after their phone dies, connection is weak, or tickets won’t load.

A report from ThreatPost shows that e-tickets aren’t actually always as safe as they seem. Researchers from Wandera found that check-in links being sent by British Airlines were reportedly unencrypted, putting thousands of passengers’ personal information at risk. About 2.5 million connections were made over the past six months meaning that anyone on the same public Wi-Fi could access the link request and use it as their own. This simply poses that question: how safe are e-tickets?

It seems like sometimes, the hassle and risk does not quite equal simplicity.