Fans Fume After Capitol Theater Switches From Ticketfly To Ticketmaster

capitol theatre1 eventbrite48 Live Nation721 ticketfly17 Ticketing273 Ticketmaster774 venues109
UPDATE (as of September 25): An Eventbrite spokesperson commented on the news, noting that “as a longstanding client of Ticketfly, we wish the Capitol...

An Eventbrite spokesperson commented on the news, noting that “as a longstanding client of Ticketfly, we wish the Capitol Theatre all the best for the future.”

“We’re proud to work with over 1,000 of the best independent music venues—both GA and reserved seating—across the country, helping them bring incredible acts to the stage and connecting artists with fans in both intimate and iconic settings,” the spokesperson said.

The Capitol Theatre, an intimate venue in Port Chester, New York, has crossed over from Eventbrite’s Ticketfly to Live Nation’s Ticketmaster as their new ticketing partner in an attempt to create a “reliable” space for ticketing. However, fans are not happy.

Late last year, Eventbrite announced that it would shut down Ticketfly and move their customers to Eventbrite Music. In a statement posted on social media, The Capitol Theatre noted that this switch “presented a point in time for us to reassess our ticketing partner.”

“We are proud to be Ticketfly’s first customer ever, and The Capitol Theatre was the first reserved seated venue they ever ticketed. This is a bittersweet moment for us,” the venue said on their Facebook page. “After exploring various options, the results gave us a clear line of sight to move to Ticketmaster, the industry’s most proven and reliable ticketing platform. We believe you will benefit from a curated fan experience, strong customer service, and the ability to transfer tickets to friends and family.

“As always, there are NO SERVICE FEES on any tickets purchased with cash at the Cap Box Office! For tickets purchased using a credit or debit card, the service fee is $2 for Cap shows and $1 for Garcia’s shows.”

The announcement did not go exactly as planned, as angry fans flooded the Facebook group. Concertgoers are disappointed with the switch to the ticketing giant, with many noting that they did not want to return to the venue, nor support Ticketmaster. 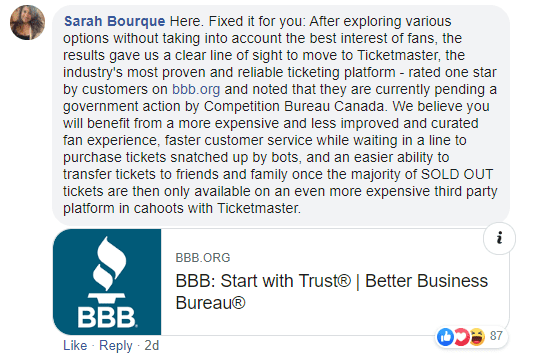 After the negative comments and suggestions began to roll-in, The Capitol Theatre addressed concerns in the comments section of the post, noting that “we hear your concerns and we want you to know that we are excited about the future of The Cap.”

“We are continuing to grow because of you, our dedicated fans, who keep coming out to see the shows and the friendly staff you know and love,” the venue said. “With growth, comes the need for a more powerful platform to sell and manage tickets and keep your data safe. We will continue to bring you your favorite artists, the same smiling faces at the door and behind the scenes, and the same Cap vibe you know and love.”

Fans were not happy with the venue’s response, as it did not address issues at hand.

Ticketmaster, the ticketing giant owned by the reigning promoter Live Nation, has faced harsh criticism over the past few months after a bombshell undercover investigation from the Toronto Star and CBC revealed that the company scalps its own tickets. The company was under fire once again this summer when Rep. Bill Pascrell (D-NJ) called Live Nation a monopoly and pushed for a bill to oversee accountability in concert ticketing. Additionally, last week, Ticketmaster made headlines when hundreds of Black Keys fans were locked out of a show when their tickets from secondary markets were deemed invalid.