A report on Ticketmaster’s purported plans to tie event access to personal health data set the company into damage control mode over the weekend. The Live Nation Entertainment-owned giant issued “clarifications” over the policy, which drew sharp criticism from some who viewed it as invasive and rife for potential abuse.

“We know there’s been some incorrect information being reported around safety/entry requirements and want to ensure everyone has all the facts,” Ticketmaster tweeted on Thursday. “To clarify, there is absolutely no requirement from Ticketmaster mandating vaccines/testing.”

Billboard initially reported the potential testing or vaccination proof scheme, which laid out a system where the ticketing giant would work with third-party health providers. Through this integration, Ticketmaster would be able to verify whether a ticket-holder had taken a COVID test and received a negative result within a certain window prior to the event, or if they have received a vaccine (once those are approved and distributed.)

Ticketmaster President Mark Yovich spoke on the record to Billboard for the story, which indicates that it wasn’t exactly coverage they were seeking to avoid, despite it having to subsequently backpedal.

“We’re already seeing many third-party health care providers prepare to handle the vetting — whether that is getting a vaccine, taking a test, or other methods of review and approval – which could then be linked via a digital ticket so everyone entering the event is verified,” Yovich told Billboard. “Ticketmaster’s goal is to provide enough flexibility and options that venues and fans have multiple paths to return to events, and is working to create integrations to our API and leading digital ticketing technology as we will look to tap into the top solutions based on what’s green-lit by officials and desired by clients.”

The reaction was swift. And, given consumer sentiment towards Ticketmaster, not shocking. The timing of the news and the announcement of a £1.5 million fine brought by UK regulators for a 2018 breach within the company’s system certainly didn’t do Ticketmaster any favors.

“Ticketmaster’s Reckless, Privacy-Shredding Covid Plan to Get You in Their Seats” screams the headline from one website.

“This raises some serious questions about health privacy and how legal, or Constitutional, it is to keep an event away from people who are not vaccinated and tracked,” reads analysis from another. And then there’s social media. 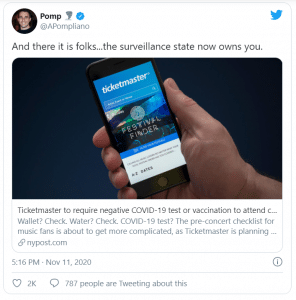 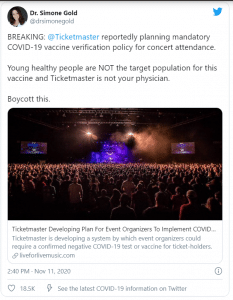 A lengthy thread on Reddit saw multiple shots taken at the company as well. One user predicted a “COVID-19 Test Check Convenience.” Another lamented “Yeah, because out of all the companies out there, Ticketmaster is the one that I want to share my medical records with.” Users also raised the potential for black market test results being used to game the system.

Ultimately, while Ticketmaster was quick to attempt to defuse the controversy surrounding the program, it doesn’t appear that the consumer concerns are that far off. The main clarification point is that Ticketmaster itself will not be forcing any vaccination or testing program onto consumers – only that they might have to include such requirements on behalf of their clients.

“Ticketmaster does not have the power to set policies around safety/entry requirements,” its clarification page states. “This would always be up to the discretion of the event organizer, based on teir preferences and local health guidelines.”

Whether or not the reaction coming from the initial announcement of the potential tie-in of health data to event attendance will change that policy in the minds of Ticketmaster’s event partners is yet to be determined. The full clarification from Ticketmaster is included below:

WHAT ARE YOUR COVID SCREENING REQUIREMENTS

We have noticed there has been some misreporting around safety protocols. To clarify, there is absolutely no requirement from Ticketmaster mandating vaccines/testing.

In short, we are not forcing anyone to do anything. Just exploring the ability to enhance our existing digital ticket capabilities to offer solutions for event organizers that could include testing and vaccine information with 3rd party health providers. Just a tool in the box for those that may want to use.

There is absolutely no requirement from Ticketmaster mandating vaccines/testing for future events. Unfortunately, this has been widely reported and is incorrect. Ticketmaster does not have the power to set policies around safety/entry requirements, which would include vaccines and/or testing protocols. That would always be up to the discretion of the event organizer, based on their preferences and local health guidelines.

We are exploring a number of safety features for event organizers to utilize as they look to welcome fans back to events. This includes tools from Ticketmaster’s recently announced SmartEvent suite like social distanced seating, contactless entry and more (read more info on SmartEvent here).  Again, the event organizer will determine what, if any, of these measures are implemented at their individual event, not Ticketmaster.

So, what is Ticketmaster doing when it comes to COVID vaccines and testing?

We are trying to prepare for potential possibilities in the future. It has become more common for people to take a COVID test before activities like traveling and seeing loved ones. If this is something that event organizers or venues choose to ask fans to do in the future (either for their own preferences or due to local health requirements), we want to be prepared.

One idea to keep the event entry process as simple and convenient as possible is to find a way for fans to link their digital ticket to their negative test results, vaccine status, health declaration or any other info that is determined to greenlight access. This would allow fans to enter an event with one scan of their ticket, rather than entering and then having to wait in another line to show their health verification.

While we have no control whether or not these factors will come into play in the future, if there’s one thing we’ve learned, it’s to prep for as many scenarios as possible.

A few important things to note:

We hope this provides some clarity, and look forward to gathering and celebrating at events together again.