Professional sports teams and promoters including Live Nation Entertainment have come out strong in opposition to proposed legislation in Georgia that would protect consumer rights on tickets they’ve purchased. Industry representatives and lobbyists have shown up in force to a pair of committee hearings in Georgia this week, hoping to keep legislators from passing the bill into law.

Georgia’s southern neighbor Florida is also considering similar legislation this session, which has similar support shown in a poll of adults in that state.

In the public hearing of the House Creative Arts & Entertainment Committee discussing the bill Thursday, Rep. Carpenter – who chairs that committee – referred to the use of restrictive ticketing systems designed to eliminate competition as a “class A money grab” by ticketing companies, following testimony given by those in opposition to the bill as well as those who support it. The committee tabled the discussion without taking action on the bill.

“This is actually a very simple bill,” said StubHub head of Government Relations Laura Dooley in testimony earlier this week before the Senate Committee on Regulated Industries and Utilities. “This is a bill about who should have decision-making powers… [these bills] put that decision-making power in the hands of the consumer, not the venue, the team, or the artist who sold them the first time.”

“Once that ticket’s been rightfully purchased and legally done so, the consumer, we believe, should have some choices,” she continued. “By inserting choice into the ticket-buying transaction, you’re preserving a free market and making sure that competitors can continue to operate in a market that has the benefit of competition, and that’s good from a consumer standpoint.”

Businesses that benefit from restrictive ticketing systems, however, disagree. In a letter submitted late last month opposing the measure, representatives of the Atlanta Braves, Falcons, Hawks, United, Truist Park, Mercedes Benz Stadium, and State Farm Arena all strongly opposed the bills, echoing similar resistance to bills introduced requiring consumer choice across the country. Their representatives repeated many of the same talking points in person this week, as did representatives from Live Nation Entertainment, as committees with both the House and Senate heard testimony on the legislation.

Rather than protecting consumer choice, the bill’s opponents are attempting to frame it as dangerous to both event security, and to the live event business in the state. They claimed, among other things, that the bill would be “scalper-friendly,” prevent them from blocking purchases by patrons “who have financially defrauded our organizations,” halting unpaid “guerilla marketing campaigns” by non-sponsors, and hinder their ability to create special themed sections. Most notably, they claim that the inability to lock consumers to a mobile-only ticketing system without any freedom to choose alternate format would cause some major tours to skip the state of Georgia entirely. (Their letter is included below)

The claims that artists will skip states that require consumer choice in ticket formats is frequently cited when event operators push back against consumer-friendly ticketing reform. It was famously rolled out in Ontario when legislators there pitched a requirement that event operators disclose the number of tickets available to the public vs. held-back, as if acts would skip the largest city in Canada. The threat that artists would skip Georgia, home to Atlanta and its six million residents, rings similarly hollow.

During the hearing, it was pointed out that StubHub partners with organizations in the state – including the Braves and University of Georgia – as an official partner. But she pointed out that her company believed it benefits consumers to have companies like StubHub compete for their business, rather than use restrictive technologies to prevent that competition, which mobile-only ticketing systems are designed to do.

“We’re willing to go against our partners on that issue to ensure that tickets can be sold on whatever platform that consumers decide,” Dooley said. “As a business, we believe we’re going to win. We don’t want to force customers to use us, we want them to choose them to use us.”

Video of the testimony presented to the Senate Committee on Regulated Industries and Utilities this week is embedded below:

Senate Committee on Regulated Industries and Utilities – 3/7/2022 from Georgia State Senate on Vimeo.

Video of testimony presented to the House Creative Arts & Entertainment Committee is embedded below:

The venue and sports team  full letter is included below (in a screenshot from the document as it was presented to the committee). 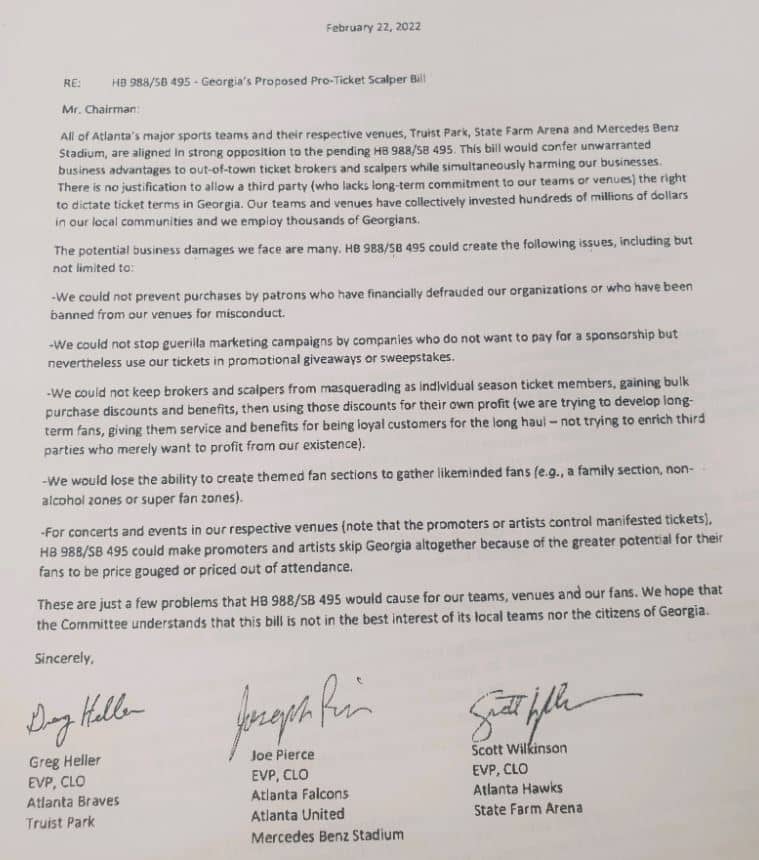