Fan outrage over the Springsteen ticket price strategy for next year’s tour has been widespread over the last week, but the singer’s management has had enough. Jon Landau, Springsteen’s longtime manager, expressed the frustration he felt at being called out for allowing Ticketmaster to use its “dynamic” and “platinum” ticket pricing systems on the tour, which pushed prices as high as $4-5,000 for some parts of the arenas when fans browsed the available tickets.

From the New York Times:

After days of this sort of commentary, Mr. Springsteen and his camp had heard enough. “In pricing tickets for this tour, we looked carefully at what our peers have been doing,” his manager, Jon Landau, said in a statement. “We chose prices that are lower than some and on par with others.

“Regardless of the commentary about a modest number of tickets costing $1,000 or more, our true average ticket price has been in the mid-$200 range,” he continued. “I believe that in today’s environment, that is a fair price to see someone universally regarded as among the very greatest artists of his generation.”

Many fans once again bristled at the attitude put out by Springsteen’s camp about the outrageous ticket prices being charged. Some challenged the notion that only a “modest number” of tickets were surged past $1,000. Others pointed out that an average price “in the mid-$200 range” was still extremely high, no matter what the artist and their management’s opinion of their status among their own generation of performers may be.

“Hard to believe that Bruce Springsteen turned out to be the one to make music fans miss scalpers,” tweeted ”Bill Werde, a onetime Billboard editor. 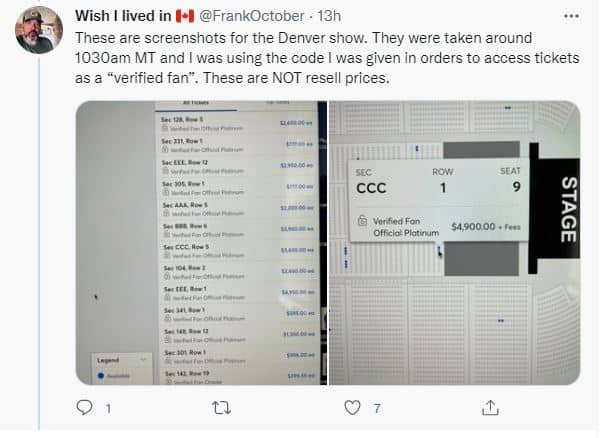 The reality is, both Landau and Springsteen fans are right. The artist has ever right to charge the ticket prices they feel they can demand of their audience. As Live Nation always points out, pricing shows at below the maximum market price does leave opportunity for people to buy tickets strictly for the purpose of reselling them. But fans have every right to feel betrayed by the artist in this shift – instead of a small number of tickets being bought out by those intending to resell them while a huge portion goes to “real fans” at lower prices, the artists are now charging what amounts to the “scalper” price for the entire audience, and a truly extortionate price for a small percentage of seats when “platinum” prices are involved.

According to data released by Ticketmaster over the weekend in reaction to the blowback, more than 10 percent of the tickets sold on the tour were subject to “dynamic” pricing that surged numbers to the stratosphere during the onsale. More than 1.3 percent of tickets were being sold for more than $1,000 each. And it was made clear that Springsteen and his managers were directly involved with the pricing strategy:

“Promoters and artist representatives set pricing strategy and price range parameters on all tickets, including dynamic and fixed price points,” a Ticketmaster spokeswoman said in an emailed statement. “When there are far more people who want to attend an event than there are tickets available, prices go up.”

The real question is – will fans continue to let their heroes do this to them? Thus far, there have been angry reactions to the pricing decisions made by artists and their managers in several instances since the live events industry got back on its feet post-COVID shutdowns. But artists and their managers don’t appear to have been deterred from the practices, and Live Nation’s earnings reflect that, with record profit rolling in for the California-based entertainment giant directly attributed to dynamic and platinum pricing schemes.

As the saying goes – you can shear a sheep many times, but you can only skin it once.

Europe and the UK