Adele33 Adele Ticket Prices2 The Colosseum at Caesar's Palace5 Weekends With Adele14
Fans who received notification that they were selected in the “Verified Fan” presale for Adele’s upcoming residency in Las Vegas will have to wait...

Fans who received notification that they were selected in the “Verified Fan” presale for Adele’s upcoming residency in Las Vegas will have to wait another day. The presale for the Weekends With Adele run at The Colosseum at Caesar’s Palace scheduled for Tuesday was scrubbed, reportedly due to an outage on Amazon Web Services. Ticketmaster plans to try to host the presale on Wednesday, December 8. Adele ticket prices have yet to be released (since the presale didn’t go on as planned), but some analysis expects an average price of $400 – which may even be underestimating things.

Due to an Amazon Web Services (AWS) outage impacting companies globally, all Adele Verified Fan Presales scheduled for today have been moved to tomorrow to ensure a better experience. Fans will receive an email with updated info on their new presale time.

The outage wasn’t known until earlier in the day Tuesday, meaning that some fans had already begun the process of queueing before finding out that the sale wasn’t happening, adding disappointment on top of what is an already enormously stressful process, and that’s just for the fans who didn’t get a “sorry, you weren’t verified” notification for the run of shows. Ticketmaster has already indicated that it likely won’t keep any tickets aside for any sort of general public sale, holding back the entire 24-show run at the 4,000-odd seat venue for those it “verifies” (plus whatever other insider holdbacks, platinum offers, or direct secondary market distribution it decides upon).

“Adele is coming to The Colosseum at Caesars Palace in Las Vegas with shows from January 21, 2022 to April 16, 2022 and wants to make sure fans have the best chance to get tickets.,” reads the registration page. “We expect the demand for tickets to see Adele to be overwhelming. Due to the limited quantity of tickets available, if demand from Verified Fans exceeds supply there will not be a Public Onsale. Registering for Verified Fan is the best way to ensure you have a chance to purchase tickets.”

For many, that ground to a halt Monday with a waitlist email: 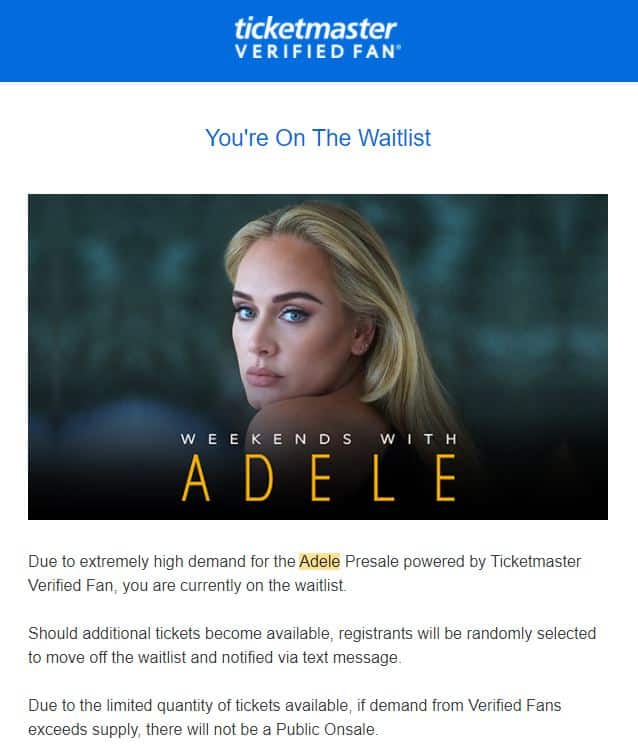 For others, the good news of an actual presale code was marred by the issues for Tuesday (which won’t likely make the actual presale any smoother, based on the lengthy history of stressful and buggy presales for high demand artists.

The last thing I need is Ticketmaster fuckery with these Adele tickets pic.twitter.com/lYBjxKWwW5

Demand is expected to be substantial for the shows, which mark the singer’s first public performances since 2017, ahead of her already sold out shows at BST Hyde Park in the summer of 2022. The Colosseum at Caesars Palace has a capacity of just over 4,000, meaning that a maximum of under 100,000 tickets will be available, and likely far less given the vast quantity of tickets that will likely be held back or distributed directly to through secondary marketplace partners.

Adele ticket prices for the residency have not yet been released, but speculation is that they will be astronomical for those lucky enough to be given the chance to buy. Fans weren’t happy with Adele’s ticket prices for BST Hyde Park, which started at £90.45 (approximately $125) and went all the way to £579.95 (approx. $800), not including fees.

Analysis posted to JustJared.com speculated that the average Adele ticket price for the residency could be expected to hit approximately $400 per seat, assuming her team wants to hit the $1.7 million gross per show that Bruno Mars saw with his residency in the city earlier this year. Those numbers would likely mean that more than half of the venue would see prices of higher than $500 per ticket – before fees – with premium seats far more (not to mention eye-watering “platinum” options should they be deployed). “Cheap” seats would almost certainly be well in excess of the tour average price of $107 the last time Adele went out on the road.

It wouldn’t be at all surprising to see the Adele ticket price numbers be even higher – given that promoters have openly admitted that ever-increasing ticket prices have helped fuel their return from the COVID-related shutdowns to profitability.

We’ll find out tomorrow once the presale actually gets underway (assuming the AWS issue isn’t ongoing).